Lorem Ipsum crowdfunding campaign ends in hours, and so may the bookstore (update) 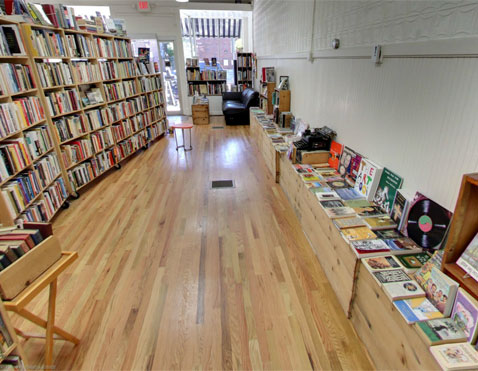 Lorem Ipsum crowdfunding campaign ends in hours, and so may the bookstore (update)

An attempt to crowdfund more life for Inman Square’s Lorem Ipsum bookstore expires in a little more than a day, but at least the store’s time at 1299 Cambridge St. doesn’t, founder Matt Mankins said Wednesday.

The landlord’s lawyer recently backtracked a bit after telling Mankins he would have to be out Feb. 1.

“We panicked, basically,” Mankins said. “I was able to talk to and implore the lawyer, show him the Indiegogo campaign and say, ‘Look, we’re making an effort.”

It bought the store a little time for Mankins to find a path to profitability or at least an approach that will make more money than the current one. In November, he took to an online discussion forums looking for a buyer or ideas about how to restructure his nine-year experiment in linking a brick-and-mortar bookstore with emerging retail technologies. In December, he started the funding campaign with an idea to turn Lorem Ipsum into more of a “Netflix for books,” a plan that would give subscribers at different tiers various services and access to book-related activities.

Mankins said he has received advice, including from the owners of Harvard Square’s Harvard Book Store, and “an outpouring of support,” but the 236 funders as of early Thursday made for less than $9,000 in pledges out of the $29,000 needed to pay $23,300 in back rent and create a buffer on the way to the member-benefits approach. Unlike some crowdfunding sites that operate on an all-or-nothing basis, Indiegogo will give him whatever money his campaign has already earned, although it will take 9 percent. (The site takes only 4 percent if a campaign reaches its funding goal.)

“There’s no one who has a checkbook out” for a major donation, Mankins said.

Landlord Frank Pierce, of Pierce Holdings in Newburyport, has been more than fair, he said. A deal in July would have let the store stay through 2014, but what Mankins thought was a seasonal downtick in sales to be made up the next month became a longer slump, and “we fell behind” on rent.

The prizes for contributing to the Indiegogo campaign start with adding three messages of your choice to cash register receipts for $10 and having a book selected for you for $25. There are midrange prizes such as T-shirts and memberships and, at the top, a $2,500 founding status in “Lorem Ipsum 2.0” and a chance to become part of store decision-making.

“I wish I could offer more. Indie bookstores matter to me,” Michael J. Riser told Mankins after contributing $25 to the campaign. “Unfortunately, I’m a student and author living on increasingly non-existent money … I hope you can keep your doors open.”

Mankins said he will know more after the campaign ends Friday and he talks again with Pierce.

He went into more detail on his plans with Erin Baldassari at The Cambridge Chronicle. To contribute to the funding campaign, click here. The store’s website is here.

Update: On Thursday, with five hours left, the Indiegogo campaign had reached $17,053. It can’t be extended, Mankin said he was working on a “follow-up way people can help.” He also said he’d spoken with his landlord: “We made a proposal today, and he’s agreed to extend our time for seven more days to give him time to consider it.”