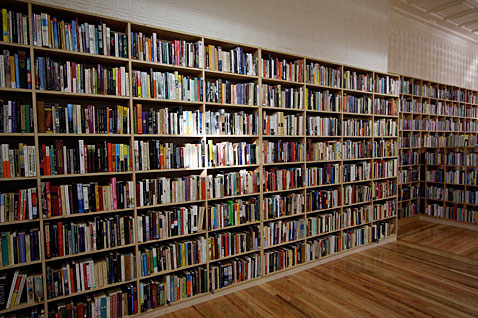 Lorem Ipsum Books in Inman Square could change owners — or shut down — after nine years in business. (Photo: Jenny Spadafora)

Inman Square’s used bookstore, Lorem Ipsum, is looking for a buyer, says The Boston Globe’s Scott Kirsner. Nine years after its founding as a lab to see how a bricks-and-mortar store could use the Internet to its advantage, founder Matt Mankins is looking online for an even newer model, or for someone to take over.

“We tried many things, but were unable to get the store from red to black … It’s time to innovate again,” Mankins wrote via ycombinator.com. “The bookstore needs fresh ideas, a radical change in thinking and a reimagining of the role of the bookstore in the future. I don’t want to shut the store down, but may be forced to. Instead, I’m looking to pass the store to other keepers’ — other innovators’ — hands.”

The store, at 1299 Cambridge St., has moved location, tried a variety of pricing models and done such things as tweeting a daily bargain, cutting the price of a book by 10 percent if the word of the day is in its title. (The word Thursday was “settlement.” Wednesday it was “ships.”)

Kirsner said Mankins, a Massachusetts Institute of Technology Media Lab alum who has since moved to New York, has received some interesting suggestions, including “printing Ph.D. theses, setting up an in-store café or turning part of the store into a co-working space for freelancers and entrepreneurs.” There has even been some interest in a sale.

Cambridge was legendary for its bookstores at one time, but five have closed since 2009 ( Kate’s Mystery Books,  McIntyre & Moore Booksellers, the Globe Corner Bookstore, Curious George & Friends and Tokyo Kid, with Curious George opening again under new ownership) and two others have had close calls dating back to 2004 (Rodney’s Bookstore and the Grolier Poetry Book Shop).

The full story is here.

Hobojacket shut down with apologies from its MIT-student founders. The Hobojacket website, which offered to give homeless people jackets of competing universities, had a short and ignominious life. The story blew up only Monday in The Daily Dot and BostInno, telling how students Jin Pan and Cathie Yun launched a site they described as “the politically incorrect but right thing to do.” While the founders’ target was Caltech, the site allowed users to name a variety of rivals and send their “donation” to a school’s online shop. The founders reported more than 650 such transactions before publicity began to turn nasty.

Gawker Media sites such as Jezebel focused even more attention on the students, who at first defended their idea (saying Facebook also began on somewhat sketchy grounds of objectifying women) and by Thursday decided to shut it down with an apology. Pan said:

I thought I had a clever idea for leveraging existing college rivalries to raise money to provide warm clothing for the homeless. But I did not actually understand that my gimmick was dependent on objectifying the homeless. The site’s so-called edgy manner was designed to spread quickly, but I realize now that it also allowed my insensitivity to go viral.

I wish I could rewind time to Sunday and reverse the decision to take the site live. But time is irreversible and I’ve learned a hard lesson. I’m sorry that I offended so many, and I’m disappointed in my own lack of judgment. I’ve matured a lot over the last three days in listening to the flood of more mature voices out there. I especially apologize for using those who can’t as easily speak up for themselves.

The Sinclair says it might open next week, and explains its delays. The Sinclair, a 525-person nightclub and 104-person restaurant at 52 Church St., Harvard Square, was announced a year ago and went through the city licensing process over the winter, winning approval in January. Its liquor license was approved Oct. 31 after an eight-month delay — but its opening had been given as Oct. 30 nearly two months earlier. After at least three false starts since then, in which shows were scheduled and moved or canceled only sometimes with warning, its manager spoke this week with Erin Baldassari at The Cambridge Chronicle.

“The new estimate is sometime next week, assuming all goes to plan,” Baldassari wrote Wednesday after talking with Josh Bhatti, of parent company Bowery Presents Boston. She quotes Bhatti as explaining:

We’re not a standalone building. Fire and Ice is below us, there are tenants above. So any work we do when you’re running plumbing or anything like that, we’re going into someone else’s space, and we can’t do that during normal business hours. If we need to run plumbing downstairs, everything has to stop on that until 1 a.m. The night work has definitely been a big holdup.

The full story is here.