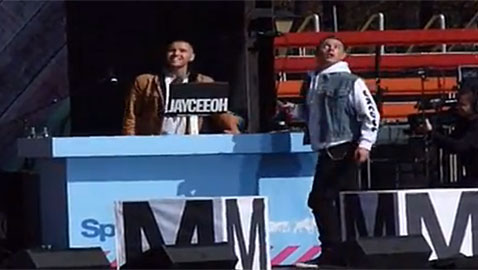 Sammy Adams: The rapper suffered a seizure or collapse while performing at a Hurricane Sandy benefit March 23 in New Jersey, with ContactMusic saying he “appeared [disoriented] and confused before collapsing” and MusicFeeds going a wee bit further, calling it an “‘Exorcist’-style seizure”:

Aides soon flooded the stage and every one seemed pretty freaked out by the collapse. Adams was taken to an ambulance, but has since tweeted that everything is OK. Hopefully they’ve got him under close examination just in case he starts projectile vomiting and spinning his head around.

In the TMZ video above, Adams seems to be tracking something in the air in circles, lower and lower before finally falling. His Facebook page and website make no mention of the incident, although he tweeted: “Thanks for all the support, guys. Been under the weather and traveling extra to get this music out! Appreciate the love.”

Paul Michael Glaser: The author, AIDs activist and former “Starsky and Hutch” star is in the April 2 “Oprah: Where Are They Now?” according to TV by the Numbers.

John Malkovich: Once the star of “Dangerous Liaisons,” now the director of French source material “Les Liaisons Dangereuses,” Malkovich brings his staging to the July 6-28 Lincoln Center Festival on “a set that resembles a rehearsal studio, with clothing and water bottles scattered about … The actors are matched in age to the characters they portray, and the love letters central to the plot are sent on smartphones and electronic tablets. All the actors – even those not in a particular scene – remain on stage observing their colleagues. The self-consciousness of the actors as they watch each other perform mirrors the self-consciously executed intrigue as the plot unfolds.” For some reason, it sounds Malkovichian.

He’s also starring in “The Giacomo Variations,” which gets its U.S. premiere at The Cherry Orchard Festival of the Arts in New York from May 30 to June 2, Playbill says.

Passion Pit: The electropop band has scored a spot on the “Iron Man 3” soundtrack with “American Blood,” a bonus track on last year’s “Gossamer” album, according to Indiewire.

But the track everyone’s talking about is “Cry Like a Ghost,” because it just got the band’s usual top-notch video treatment. As directed by Daniel Kwan and Daniel Scheinert, “Cry Like a Ghost” uses seamless digital craftsmanship to show a woman moving between scenes from her relationships – all hinting at equal parts pleasure and sadness. The memories start when she goes running into the woods to dance out the confusion … and ends with the film reversing, showing her headed right back into it.

It’s about “a girl dancing through her relationships,” the directors said. “We’re trying to show how messy, confusing, funny and sad and weird that is.”