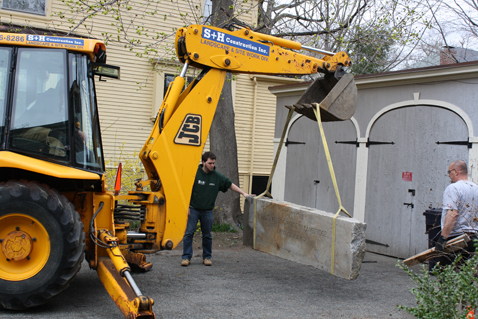 A 133-year-old inscription on a 144-year-old granite slab moves back home 7:30 a.m. Tuesday after being lost, buried in a landfill, for 84 years some three miles away.

Excavations at Atmark, a 428-unit luxury community by Fresh Pond, were already turning up some 19th century glass bottles with cork tops in January, said Gavin Kleespies, of the Cambridge Historical Society. Then workers ran into, and pulled out, a 3,000-pound slab of granite.

“The foreman came over with a big highway broom and rubbed some of the impacted dirt out of the engraving and they saw that it said ‘Site of the first meeting house in Cambridge,’” Kleespies said. “‘Erected AD 1632.’”

With the help of the Cambridge Historical Commission’s Charles Sullivan, that site – and the origins of the rather more recent granite slab itself – were pinned down. Kleespies and Sullivan wound up confident the marker had been a part of a building built in 1869 by William Wright to house his bakery at Dunster and Mount Auburn streets in Harvard Square, which was indeed the site of the city’s first meeting house.

The inscription had been carved “In 1880, by order of the city of Cambridge,” according to a reference found by the historians in the 1907 Daughters of the American Revolution’s “An Historic Guide to Cambridge.”

The Wright building was taken down in 1929 and the debris from the building was taken out to the marshes around Fresh Pond to be used as fill. A factory for the Continental Can Co. went up on the site in 1947, the historians said, leaving the landfill and historic slab undisturbed until after work began in October 2011 for Atmark on Fawcett Street.

The Harvard Square location, meanwhile, became the a “final club” for Harvard undergrads in 1930. Kleespies said he visited the 45 Dunster St. site and “realized that there was a small strip of sidewalk [that] seemed like a perfect location to put the marker. It would return the stone to the site of the Wright building while not obstructing a public way or interfering with the building.”

The present and future

The current owners, The Fly Club, agreed to host the marker; S+H Construction was willing to move it, taking a break from the apartment construction site at 223 Concord Turnpike, and pour short concrete footings to hold it.

The footings were poured April 17, “thanks in part to the Harvard Square Business Association who, on very short notice, was able to make a few calls and provide access to water and electricity for the concrete mixer,” Kleespies said.

After some false starts – April 19 saw the city on lockdown while suspects in a bombing were hunted, and the next Friday there was a “scheduling glitch,” Kleespies said – S+H Construction is to set the slab in place Tuesday.

This post took significant amounts of material from a press release. It was updated April 30, 2013, to correct the location of the discovery.