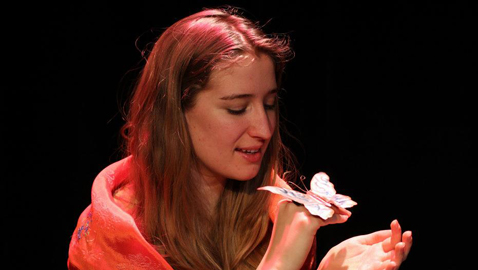 The Liars & Believers theater company brings its latest experiment to the Cambridge YMCA Theatre next month for a two-day run, and it looks, as usual, complex, creative and wonderful.

As explained by director Jason Slavick in an Indiegogo fundraising campaign running through May 10, the troupe’s “Icarus” is “a tale of poverty, love, oppression and transcendence” that sets the mythical, doomed inventor in the Depression-era Minnie Minoseczeck’s Menagerie of Marvels as a way to examine how America is getting through the Great Recession and its aftermath.

But just as the Menagerie of Marvels is “a show of amazements and abominations,” the show is the product of collaboration with actors, dancers, writers, musicians, artists and puppeteers, including music by Nathan Leigh; puppets by Faye Dupras; and burlesque by Karin Webb.

What Time is it Mr. Fox, The Michael J. Epstein Memorial Library and other bands have contributed their talents, and there will be visual art by local artists and roving performers during the shows, Slavick said.

The show goes up May 17-18 at the Cambridge YMCA Theatre after a development process of nearly a year. Funding has come from individual donors, the Cambridge Arts Council and Mass Cultural Council, but the $2,000 online fundraising campaign – at $1,168 from 15 funders with two weeks to go – is already earmarked for everything from performer salaries to the cost of props and puppets, and the troupe already has its eyes on New York. “Really, we need to raise $3,000,” Slavick said.

Check out previous Liars & Believers shows, such as “28 Seeds” with Walter Sickert & the Army of Broken Toys, here.

The fundraising campaign, including prizes of original, custom songs, an omakase sushi dinner for two and a private showing of “Icarus,” is here.