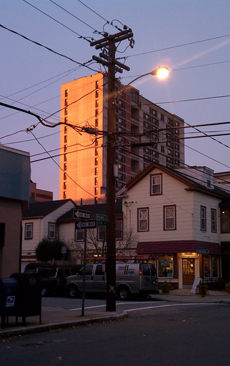 The Manning Apartments development near Central Square could be renovated under a new plan proposed by the Cambridge Housing Authority. (Photo: Jasonic)

The Cambridge Housing Authority has a plan to renovate its deteriorating public housing developments, and this one might have a better chance of winning federal approval, officials say.

The authority has been hunting for money to fix substantial problems in its aging projects, many of which have not had major repairs in decades, while federal funding has shrunk. Officials have warned that without extensive rehab, the developments could deteriorate to the point where they can’t be used. More than 2,500 low-income families and individuals live in Cambridge public housing.

Two years ago CHA officials thought they could use a loophole in federal rules to double the authority’s federal subsidy, technically “disposing” of its public housing to nonprofit private entities controlled by the authority. The federal money and private investment would have financed extensive repairs.

But the federal Department of Housing and Urban Development closed the loophole two months before Cambridge applied for approval. Scores of other housing authorities had also found the loophole, and the federal agency faced increased expenses if it didn’t change its rules.

Since then, the authority has tried to use another federal program to get money for  redevelopment of fewer units, without success. At monthly board meetings, authority Executive Director Gregory Russ repeatedly reported that federal officials took a dim view of the idea.

Last week Russ had better news about the authority’s latest try. “In our view we made them an offer that they couldn’t refuse,” Russ said of a meeting with federal officials. “For the first time they were very intrigued.” A HUD official even visited the city this month to look at some of the five developments the authority is proposing to renovate: Washington Elms, Newtowne Court and Manning Apartments near Central Square; and at Roosevelt Towers and Millers River in East Cambridge. The five projects have a total 1,066 units.

The federal program, Rental Assistance Demonstration, does not provide more funds from Washington. It can work only if the authority plugs the money gap with existing but unused Section 8 rental subsidies, officials said. Section 8 subsidies help poor tenants pay rent in private apartments; they are in great demand as Cambridge rents skyrocket.

A question for the lawyers

Russ said the number of rent subsidies needed would be “minimal” and CHA officials have previously said that no current Section 8 tenants would lose help. Still, there could be fewer Section 8 vouchers available for hundreds on the waiting list. “We have never made a secret” that the authority could decide to sacrifice some private-housing rental subsidies “to preserve the ‘hard units’” in public housing, Russ said.

The need to use rent subsidies could kill federal approval, Russ said. Cambridge is one of 34 high-performing housing authorities that have the freedom to take some actions without getting HUD’s okay, including moving Section 8 subsidies to public housing.  But rules for the Rental Assistance Demonstration program appear to bar housing authorities such as Cambridge from using that authority to finance the experimental program, Russ said.

Federal officials told Russ and his staff they would consult HUD lawyers to see if Cambridge can use its authority over the vouchers. “If [the lawyers] say they are comfortable, I think we’re going to get a deal,” Russ said. And  “my impression is that it will be soon.”

“I have to be prepared they they would say no, but they are working with us and it feels a lot different than the previous times,” Russ said.

This story was updated May 20, 2013, to correct the name and location of one of the affected housing projects.