For sexy spy songs with chanteuse Niki Luparelli, go-go to Oberon on Wednesday 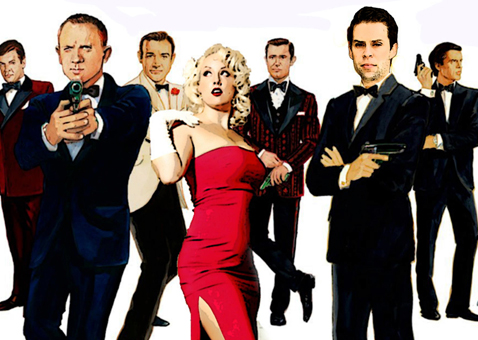 For sexy spy songs with chanteuse Niki Luparelli, go-go to Oberon on Wednesday

Luparelli backstage at a January 2011 performance of spy tunes.

On Wednesday at Harvard Square’s Oberon, chanteuse Niki Luparelli and the Gold Diggers perform favorite James Bond and spy-themed songs live, with Bond-inspired burlesque and go-go dancing. (The perfect accompaniment to such Sean Connery-era Bond songs as Bassey’s “Goldfinger” and “Diamonds Are Forever,” Tom Jones’ “Thunderball” and Nancy Sinatra’s “You Only Live Twice.”)

“Diamonds are Forever, but this show is one night only,” Luparelli said.

She’s the ideal personality to bring this to the stage. In addition to Luparelli and the six-person Gold Diggers being voted Best Jazz Act by Pulse Magazine in 2011 and last year, Luparelli was twice anointed Pulse’s Sexiest Musician. She’s appeared on “Chronicle,” NESN, Fox25, MyTV and “The Today Show” and has filmed a segment for the AMC series “Showville,” which travels the country seeking talent. She appears May 30.

This is also not Luparelli’s first take on the Bond repertoire. She’s done “James Bond Cabaret” at shows in Framingham and at Oberon.

This show is, however, the premiere show for Art & Venue, a Harvard Business School crowdsourcing venture for performers. Once called CreativeSpaces, Art & Venue became a finalist in The Deans’ Cultural Entrepreneurship Challenge at the Harvard Innovation Lab. The online platform is supposed to provide “an easy way for emerging artists to find, select and book venues through a direct payment or ticket prepurchase marketing campaign.”