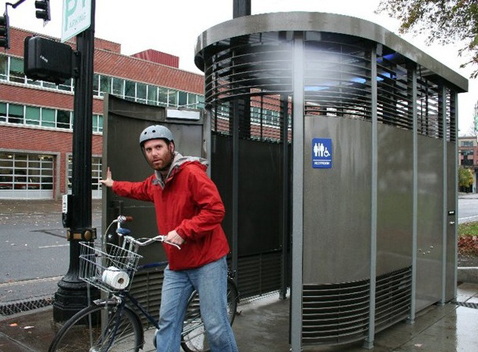 The city has 44 restrooms that are open to the public, but all have their peculiarities – like the ones in the firehouses that can’t be used when the firefighters are out, or the many that are seasonal, out of the way or simply unpredictable in their hours. 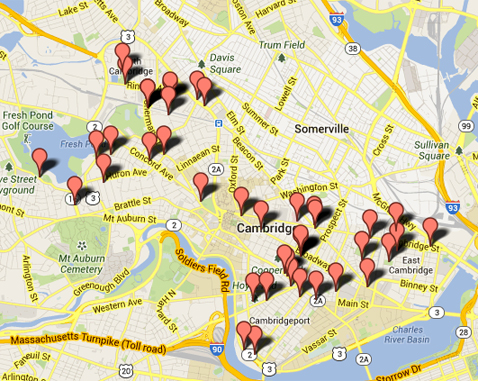 Activists for the homeless and humanity have been lobbying city councillors about public toilets since December, leading to the formation of a group called Advocates for a Common Toilet and an “I [heart] toilets” sticker campaign.

“Cambridge is a world-class city. Well, world-class cities have public toilets. Why are we so far behind in this?” councillors were asked June 3 by Zachary Kerzee, an ACT member who is a student at Harvard Divinity School and music director of the Outdoor Church of Cambridge, which is involved with Cambridge’s homeless. He said he brought 600 letters from people agreeing with the need for a public toilet on Cambridge Common and elsewhere in the city.

“Almost everyone I encountered shared a story of a time they barely missed major embarrassment walking through the streets of Cambridge because there wasn’t a public restroom. Mothers and grandmothers told me stories of the times they had to rush children and grandchildren into the bushes because they couldn’t hold it. Commonly I’ve met with statements of embarrassment and outrage,” Kerzee said. “If someone were to visit my home and ask to use a restroom, I wouldn’t direct them to the nearest Starbucks.”

Department of Public Works Commissioner Lisa Peterson, responding the same night, said a working group asked for by the council in December has been meeting to discuss public toilets citywide, including one put up temporarily to serve the Cambridge Common while the Historical Commission considers where a permanent replacement might go. While a $4 million renovation is under way at the Common, a permanent public toilet is yet not part of it.

The public will be involved soon with the working group, which has “high-level involvement” from a range of city departments, Peterson said. No solution is due within the next couple of months, and even when a solution is found it is likely to be rolled out in phases.

“We recognize there is a need and an interest,” she said. “We will be doing a very focused survey to really understand exactly where the need is and at what times are the greatest needs so we can develop solutions that are most appropriate to different locations.”

She also identified for the council the model of toilet that has become the front-runner in the group’s research for what might be placed strategically around the city: the Portland Loo, named after its hometown and patent holder, Portland, Ore. The city sells the stainless steel Loos for a reported $90,000, with buyers on their own to pay for their cleaning; one reason the city sells them is to pay for cleaning their own. Seattle is considering buying a Portland Loo and giving more height on a building to a developer who would handle upkeep in trade, Williamette Week reports.

Cambridge has only gone so far as to meet with a fabricator of the device to look into the possibilities, Peterson said.

It was Seattle’s previous public toilet disaster, in which millions of dollars were spent on self-cleaning facilities that were taken over by the homeless, used for illicit activities and ultimately broken beyond repair, that helped inspire Portland to create a toilet with no mirror, very little privacy – there are louvers at the top and bottom so you can see people’s feet and hear what they’re doing – and no running water inside, although there is a spigot outside.

“We’re looking at everything”

Reached by phone Monday, Peterson acknowledged that there are problems with the classic Portland Loo design when transplanted to the Northeast from the Pacific Northwest. Subzero temperatures can freeze the spigot, or the person inside, and snow will infiltrate at the top and bottom.

“Those are important considerations, and that was my initial question as well – how could it be year-round?” Peterson said. “A spec sheet shows it does have electrical power features that could be plugged in or take a solar-powered option for LED lighting and a 24-volt, 30-watt heat trace integrated with the plumbing and toilet systems.”

“They are making modifications,” she said, while reminding that the Portland Loo was presented only as one possibility at the start of the study.

Meanwhile, the public has the 44 restrooms and a handful of other, awkward semi-solutions such as use of facilities in MBTA stops – which don’t work for many because the restrooms are only accessible after a user pays to get past the T stop turnstiles, councillor Minka vanBeuzekom said. In addition, facilities at playing fields aren’t always accessible. Some coaches refuse to take keys, said Richard C. Rossi, who is a month away from moving up to city manager from deputy city manager.

A public restroom solution is likely to be a mix of new installations, the current options with better ways for people to find them and negotiations with Cambridge businesses and institutions, Rossi said.

“We’re looking at everything,” he said.