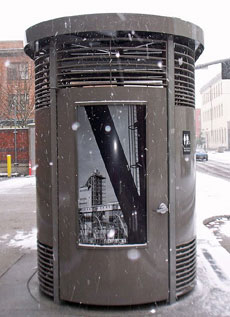 A Portland Loo in its hometown of Portland, Ore. (Photos: John D)

The city’s first free and freestanding permanent public toilet should be in place by the end of this year in either of two locations in Harvard Square, serving as a test for more facilities throughout the city, officials said Monday at a meeting of the City Council.

The Harvard Square project goes out to bid this week, and a final location should be announced at a community meeting in late May or early June, Acting City Engineer Kathy Watkins said. The toilet is likely to go on General MacArthur Square, a small, V-shaped Harvard Square island between the Old Burying Ground and Harvard Yard, but if utility connections are too difficult, she identified a fallback in Dawes Island – known mainly for a bus stop and embedded hoofprints showing the path of William Dawes’ ride with Paul Revere on the eve of the first battle of the Revolution.

Further talks with the Historical Commission are expected, Watkins said. The toilet’s placement isn’t expected to move any existing structures or statues or call for trees to be taken down.

Having a free public toilet installed for tourists, the homeless and residents in need while away from home will be a milestone in a long process. A two-year city process including a full-fledged toilet committee recommended a Harvard Square toilet in 2003, but nothing came of it. Calls for a permanent structure returned to the council a decade later, although the need had never gone away.

Elie Yarden, an outspoken resident who ran for council last year, said he’d been talking for the past quarter-century about the city’s need to supply public toilets.

Richard Parker, a member of Christ Church Cambridge, said there had been an open-bathrooms policy for the homeless and others in need in Harvard Square for some three decades, but the expense and demands of the use forced an end to the policy two years ago. “The church community and other church communities and other civic communities around the square decided it was time to ask the City Council and city manager to step forward,” Parker said, urging approval for a $9.2 million request for funds that included the public toilet among other projects. “It’s an act that not only signals the world-class nature of Cambridge as a city but also a sense of both grace and responsibility to provide a public facility for human beings at all socioeconomic and social levels, visitors and residents alike.”

“It’s something that’s been sorely missing,” he said. “It would be a meaningful improvement for Harvard Square as a destination for the hundreds of thousands of people who visit on weekends and the thousands who pour through every day.”

An online survey by the Health Department found overwhelmingly that people didn’t know where to find public bathrooms, Parker reminded the council.

Last year, Deputy City Manager Lisa Peterson said there were 44 toilets available for public use at various times throughout the city.

The frontrunner design for the Harvard Square toilet continues to be the Portland Loo, which has a “sleek, minimalistic design that people feel very positive about,” Watkins said. Of the project’s entire $275,000 price tag, about $100,000 will go to the Loo itself.

In June, Peterson acknowledged questions about how well the toilet design would transplant to the Northeast from its hometown of Portland, Ore. Subzero temperatures could freeze the spigot, or the person inside, and snow would infiltrate at the top and bottom. 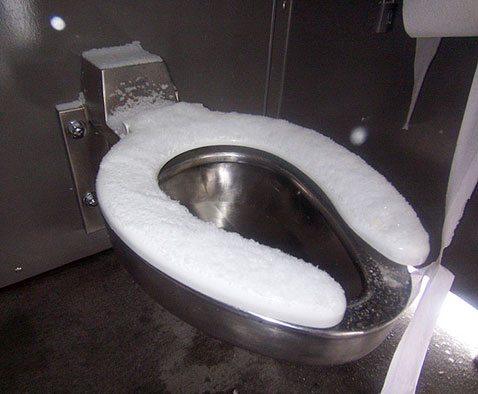 Open at the top and bottom, the Portland Loo can let in snow and rain.

“That was my initial question as well – how could it be year-round?” Peterson said. “A spec sheet shows it does have electrical power features that could be plugged in or take a solar-powered option for LED lighting and a 24-volt, 30-watt heat trace integrated with the plumbing and toilet systems.”

Watkins wasn’t aware of any modifications or steps being taken to keep the toilet warmer or free of snow and rain, but noted that some cold and discomfort would keep people from occupying the toilet for longer than was needed. “This really is a test,” she said. “We’ll see if it’s a success.”

The toilet is to be cleaned three to five times a day by a combination of city and contracted staff.

“We certainly view this as a pilot we feel will really be successful. Assuming this is successful and is the appropriate kind of facility, we would then look at ways to extend it throughout the community,” Rossi said.

One of those techniques would be to get developers at work in areas such as Central Square to provide sidewalk property for more free, 24-hour toilets, he said.

The $9.2 million request was approved Monday for a second reading, on its way to likely final approval.