‘Man of Steel’: Mighty leaps of logic through a dark script and into spectacle 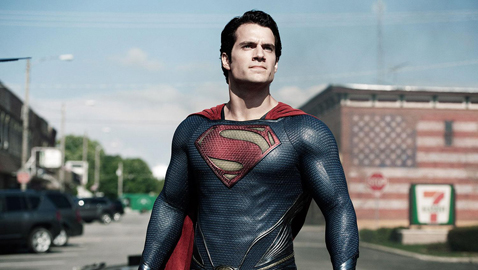 ‘Man of Steel’: Mighty leaps of logic through a dark script and into spectacle

Zach Snyder’s always been big on bluster and pizazz but a bit lacking when it comes to the essentials of storytelling. Take “300” or “Sucker Punch,” which made for titillating trailers set to edgy, esoteric rock (Nine Inch Nails’ “Just as you Imagined” layered on clips of the Spartans battling Xerxes in “300” may be the greatest music video/movie trailer of all time), but when it came to holding an audience’s attention for 90 minutes, only fanboys and cultists who dug Gerard Butler’s CGI-enhanced abs and righteous barking, or Babydoll and her bustier-wearing ilk beating down misogynistic ogres, could go the distance – because that was all there was: alluring visuals and sound bites, sans the bite. 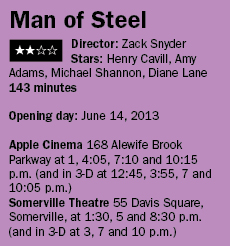 One major early steppingstone was the 2004 remake of George Romero’s “Dawn of the Dead,” which featured an eclectic cast (Ving Rhames and Sarah Polley) and zombies that could run at full tilt. Danny Boyle had done that bit before and better with “28 Days Later …” and there’s really no one who can out-shamble Romero  in the walking dead genre he pretty much invented. But sure enough, in the maddening, flesh-ripping mayhem, Snyder had carved out his niche as a hyperactive visual stylist.

Anyone who saw “Legend of the Guardians: The Owls of Ga’Hoole,” the animated adaptation of a children’s serial, would have to admit it was a surprising and pleasing departure from what one might expect of Snyder. And then there was “The Watchmen,” which certainly ranks as the most well done but widely disregarded superhero flick of the new century. It was Snyder’s moment to find that delicate and articulate balance between character development and special FX razzle-dazzle.

But on to “Man of Steel.” Snyder inherited script by Christopher Nolan (director of “Memento” and “The Dark Knight”) and David S. Goyer (the writer of the “Dark Knight” series) and the special FX (which you can experience in 3-D to boot) are top shelf. Sometimes too much of a good thing can overwhelm the senses – imagine being trapped in an elevator where a bottle of richly redolent perfume had recently spilled.

The narrative is cut neatly into three neat chapters that span time and universes. We begin on the planet Krypton, where Jor-El (Russell Crowe, doing better than Marlon Brando in the 1978 version) is father to the first naturally conceived child in decades – a taboo, because newborns are harvested from a “Matrix”-like aquarium and their destination (warrior, scientist, bureaucrat, laborer, etc.) is genetically predefined. The science and reasoning on that doesn’t make much sense, and nor does the fact that Krypton, for all its future-tech machinery and spaceships, is about to implode because Kryptonians have exhausted the planet. No forecasting, no way off? In those final moments, General Zod (Michael Shannon), a character you might remember happily from “Superman II,” launches a coup to save the race. And even though the planet is crumbling, when he is thwarted, the Kryptonian government gives into its bureaucratic leanings and gives Zod his due process, which is to send him off to a deep-space prison. I’m not sure why they’re not headed for the distant stars themselves, but at least Jor-El encapsulates his natural-born son and sends him off to Earth.

The second act does not take up with the baby being found in the cornfield by the Kents; that’s all told smartly in flashback vignettes, with Diane Lane and Kevin Costner giving wonderful, full-bodied performances as the adoptive parents. Instead we catch up with Clark (a buff and apt Henry Cavill) as a young man working McJobs on a fishing boat, as a bar back and so on. Occasionally he’ll save someone and mysteriously disappear. One of these side jobs lands him on an icecap as a civilian aiding a military operation to find out what’s trapped under the ice. Perky  (and somewhat annoyingly snoopy) Lois Lane (Amy Adams) is there too, and, as it turns out, what’s under the ice is the ship Jor-El sent to Earth long ago (again that forecasting thing). Most importantly, a father-to-son message in hologram and that essential blue lycra suit and red cape.

Now we’re cooking, and you’d half expect Gene Hackman or Kevin Spacey to drop in as Lex Luthor, but Nolan and Goyer’s script is darker than that. Before Superman can do too many good deeds, Zod shows up (it seems that prison was a safe haven) on a colonial mission of sort. He wants to rekindle the race of Kryptonians and to do so has brought along a “world engine” machine that will basically rebuild Earth to suit the new race and wipe out humans in the process. And so it’s here we learn that the Kryptonians had an imperialistic yen and a history of re-forming other planets for their own (which all somehow perished when Krypton did). The implication is that they’ve been practitioners of genocide and genetic engineering, but let’s not digress into politics, morality or a self-ward reflecting mirror.

The end game is a ballistic spectacle with Zod and his underlings and Superman beating each other through buildings and gas stations. Skyscrapers fall, F-15s get punched out of the sky and things blow up in grand fashion, but it goes on too long.

What’s missing in Snyder’s Superman is a dash of the hokey goodness that Christopher Reeve contributed to the role and the comic cold cheesiness that Gene Hackman and Terrence Stamp brought as Luthor and Zod in the ’70s and ’80s.

In all this, the mention of Bryan Singer’s 2006 “Superman Returns” feels lost, so much so in that it feels redundant with Snyder’s vision. Will this one catch fire, where the other one didn’t? Time is the judge, but I think people no longer care – or the newer versions know how to wow, but not woo.

The Reeves series set up Clark Kent as a man with flaws and here Cavill looks and feels the part, but he’s so brooding, impregnable and dark there’s not much joy in the affair. A dark hero, yes, but into all darkness must shine some lightness. And logic.