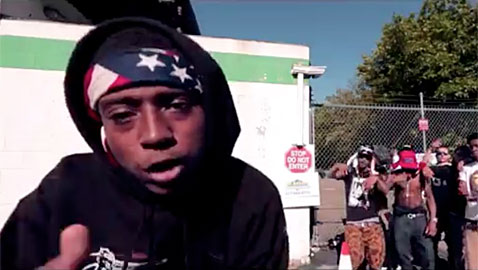 No exaggeration to say the video posted Sunday by rapper Melz starts with a bang. It literally does – a bang and a bleeding bullet wound over the Melz logo – as the introductory words play: “Life is so beautiful, so beautiful. Life is a beautiful thing.”

The song itself, the first single off Melz’s sophomore mixtape, “2 Explicit,” is called “Bang” and explains why Melz – 18-year-old Jahmel McClamy – has no time for the girls texting him: Too busy running around the city with the other young rebels. Things get more serious as the video goes on, literally darkening as Melz raps about the “other perpetrators that are out there” and warns he’s “coming for your spot.” It ends with Melz and his crew jumping out of a car and running into a pitch-black street as an ominous “To be continued” appears onscreen.

The mix, produced by Kantor, turns down the music and pumps up Melz’s lightning-fast rapping, and the video, directed by Gyms & RI¢H, is slick (and full of cool local visuals, from the Shell sign on Memorial Drive to the Alewife parking garage).

Melz, a Cambridge Rindge & Latin School graduate who formed the FastLife crew in his freshman year, appears at Tommy Doyle’s at 96 Winthrop St., Harvard Square, as part of a DJ Moneybags show at 9 p.m. July 21.