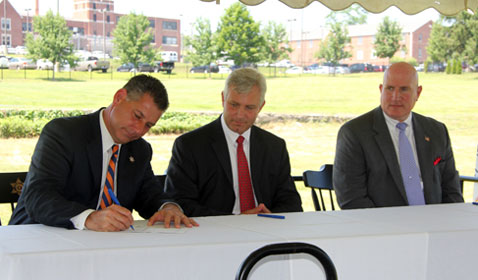 What’s called a first-in-the-nation agreement has begun to benefit veterans being held in Middlesex County jails.

Middlesex Sheriff Peter J. Koutoujian announced Wednesday that his office has entered into an agreement with federal and state agencies to work cooperatively to better identify veterans in custody and get them referrals for housing, mental health services and substance abuse and employment counseling.

“With this new initiative, government on all levels will be working together to address the needs of veterans while incarcerated and upon reentry back in the community,” Koutoujian said in a press release.

The immediate result was the identification of 44 imprisoned veterans who had not appeared in previous counts, Koutoujian said. They now know they have access to tailored services from counselors and reentry specialists at the Veterans Administration New England Healthcare System and the Department of Veterans’ Services.

“When we look at the underlying issues that lead people – veterans and nonveterans – to land in our custody, we find substance abuse, homelessness and mental health issues play significant roles,” Koutoujian said. “This initiative allows us to better work with our federal and state partners to help a particular segment of our population address these underlying issues.”

Koutoujian made the announcement at Billerica’s Vietnam Veterans Park, where he was joined by Michael Galloucis, executive director of the U.S. Department of Veterans Affairs’ Office of Public and Intergovernmental Affairs, and Massachusetts Secretary of Veterans’ Services Coleman Nee.