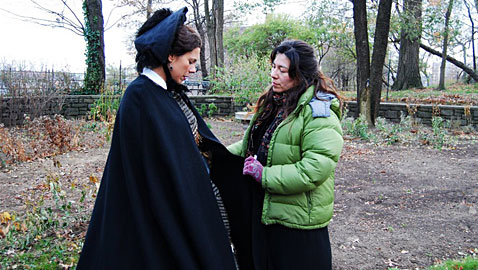 On Saturday the 22nd Woods Hole Film Festival kicks off, and while that may be a bit off from the basin of Newtowne, three filmmakers with Cambridge ties will be there with their work.

Cambridge resident and Harvard grad Maria Agui Carter will show her docudrama, “Rebel,” about Cuban-born immigrant Loreta Velazquez, a woman who fought in the American Civil War as a Confederate soldier and later became a Union spy.

Originally from Cambridge, Robert Fritz has his short, “AKT 2,” about a Swedish couple reuniting accidentally after two years and holding back devastating secrets, in “The Truth about Love” shorts package. Shot in Sweden, the film showcases an acting duel between the leads, Kirsti Torhaug and Michel Riddez.

Also appearing in the shorts program is Cambridge resident Avery Rimer’s short “Halfway Somewhere Else,” about a middle-aged man adrift and hitting a midlife crisis. The film was selected and shown at this year’s Cannes Film Festival.

The weeklong festival boasts 34 feature-length film and 104 movies overall, plus parties and panels. If you attend you’re close to Cape destinations, a bunch of beaches and ferry access to the islands. For information, the Woods Hole Film Festival website is here.