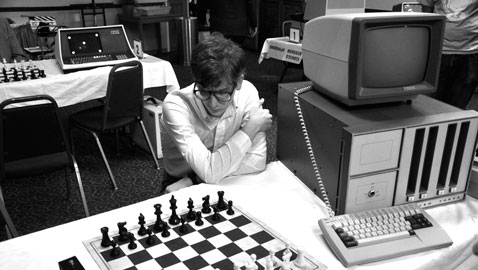 “Computer Chess,” the new quirky comedy from Bostonian Andrew Bujalski (“Funny Ha Ha”) is set in the ’80s and revolves around the object of the title. Cambridge film critic and film professor Gerald Peary makes his acting debut in the film. The film screens for one week at the Kendall Square Cinema and tonight and Saturday (the 26th and 27th) the two will be at the 7 p.m. screenings to do a Q&A afterwards.

“Searching for Bobby Fischer,” a quiet but endearing 1993 tale about a young chess prodigy (Max Pomeranc) who is more resolute about being a child than a champion. The film marks the directorial debut of Steven Zaillian who won an Oscar for penning the script for “Schindler’s List.” The excellent cast includes Ben Kingsley, Joe Mantegna, Laurence Fishburne, Joan Allen and William H. Macy.