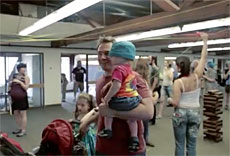 The city manager’s view on the Foundry building was clear: “It is my strong recommendation that the City Council authorize [a] sale,” Robert W. Healy told the City Council last month, after a $40,000 study.

But Healy is no longer city manager, and at Monday’s council meeting his voice and study was just one of several voices. With the night’s 8-0 approval of a cost-benefit analysis for the empty building and a meeting of the council’s Finance Committee coming at 4:30 p.m. Wednesday at City Hall – also to be televised and streamed online – his voice could fade further into the background.

The cost-benefit analysis was requested by Mayor Henrietta Davis and approved by all councillors but Craig Kelley, who felt it was too vague an order to be useful but put too much emphasis on “dollars and cents” instead of how the building could best be used by the community. Kelley said:

One part of the analysis

The Foundry Works Building, a 52,000-square-foot structure of former manufacturing space at 101 Rogers St., was given to the city in January 2012 as part of the rezoning that let Alexandria Real Estate Equities build its lab and office space tall and dense on a 15-acre campus along Binney Street. As part of the deal, officials have said, 10,000 square feet of the Foundry is set aside for community use – a use that has yet to be defined.

The City Council has been grappling with what to do with the 123-year-old building since June 2012, spurred on by impatient residents, entrepreneurs hoping some of the building will become inexpensive innovation space and arts groups getting squeezed out of the city by development and rising rents. At the end of April councillors agreed to spend $40,000 on an architects’ study recommended by Healy, which said bringing the building up to code and city environmental standards will cost about $11.3 million that is “nowhere included in the five-year capital investment plan,” according to an introductory letter by Healy.

His recommendation to sell appeared as just one part of Davis’ order for a cost benefit analysis, along with the city keeping the building and, if necessary, rehabilitating it for lease as a commercial building; keeping it and using it all as community space and nonprofit rental; improving the building for use as a child care facility; and “to be determined.” The order called for investigation of “at least” five options, with each keeping the 10,000 square feet of community space as a minimum and each examining “funds that would need to be expended to refurbish the building and any ongoing maintenance and management expenses [as well as] any potential income from sale or lease.”

The task – which Davis said was similar to to analysis done seven or eight years ago in planning the move of police headquarters to Sixth Street from Central Square – falls to the new city manager, Richard C. Rossi, for whom Monday was his first council meeting in the role after three decades as deputy city manager. He is to report back on the matter to the council.

“Way too soon to be thinking about selling”

Members of the public speaking on the matter showed various degrees of impatience, but their shared background in the arts and involvement in community groups made for little support for Healy’s report.

“This is a really opportune time for a changing of the guard in the city manager’s office. I hope Mr. Rossi will take a more deliberative approach than his predecessor did,” said Heather Hoffman, an resident active in groups such as the North Cambridge Family Opera, which faces displacement along with two youth dance organizations. “The report from Mr. Healy that says ‘It’s going to cost a jillion dollars to fix this building, so let’s sell it,’ is putting the cart before the horse.”

Hoffman, an attorney who works in real estate, noted that city law about selling city land calls makes community meeting the first step in the process, followed by a report on the issues that arose. “No report that has been submitted either with or without Mr. Healy’s signature meets this criterion. So we haven’t even started this process,” Hoffman said. “It is way too soon to be thinking about selling.”

She also argued that the council’s Alexandria zoning regarding the Foundry called for “a preference for its use as municipal or community uses,” with 10,000 square feet specified as “educational, cultural or institutional uses.”

“When you acquired it, you did not acquire it to make another biotech building,” she said. “Artists are the people who make a city a place people want to be.”

Nadeem Mazen, a candidate for City Council in November, arts-related business owner in Central Square and course instructor at the School of the Museum of Fine Arts in Boston, gave a quick rundown of the economic and tourism benefits of promoting arts in the city – the topic of a June 18 meeting of the council’s Economic Development, Training and Employment Committee – and suggested how the Foundry could play a role in it.

Mazen was among the organizers of the Foundry Equation open house event held last month to show off the site’s potential as art space. Videos for and from the event are posted here.

Rozann Kraus, president of the Dance Complex, one of the arts businesses cited by Mazen, went even further than suggesting the Foundry host arts offices, rehearsal and performance facilities.  “I would like to suggest that we allow people to not have to go to Natick for the Walnut Hill School for the Arts or Boston for the Boston Arts Academy, but that Cambridge has its own arts magnet program” for public school students adept in visual and performing arts, she said. “The arts only create a win-win situation.”

Residents also questioned aspects of Healy’s report, with Mazen repeated a question of whether selling the Foundry meant that Alexandria essentially bought zoning relief, rather than providing a community benefit equal to what its departure from the rules cost the city.

“The architectural firm that undertook it was kind of given its marching orders for what the ultimate findings needed to be, and they went out and found some backup documentation to validate the desired end result. I found it to be lacking in creativity and imagination,” Spiller said.

There is a major need in this city for rehearsal and performance space … most of the cities around us have some kind of civic performance space, and it shocks me that Cambridge doesn’t. The Foundry building may or may not be the right building for this, but I urge the council to put it on the front burner for the continued vitality of Cambridge – work in conjunction with the Cambridge Arts Council and in conjunction with the many arts organizations and get the right people at the table to think creatively and earnestly about the needs of the arts community. I can tell you, the orchestra has not been invited to this table, and I think we have some claim to some long-standing viability and authority here.

“For us, for the CSO, we find ourselves looking increasingly outside of Cambridge. And as a lifelong Cambridge resident, I find that truly heartbreaking,” Spiller said.