Sell the Foundry, city manager advises, or fixes will cost $11.3 million we don’t have 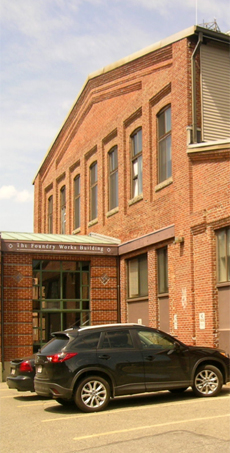 Sell the Foundry, city manager advises, or fixes will cost $11.3 million we don’t have

The Foundry Works Building, which went up in 1890, will cost some $11.3 million to bring up to city environmental and legal standards, a study says.

While local artists geared up for a four-hour Saturday open house to tout the Foundry building’s future as an arts center, the city posted a report making that future look complicated and expensive.

Bringing the building up to code and city environmental standards will cost about $11.3 million, according to a reuse study and estimate by HFMH Architects.

“Funds for such a project are nowhere included in the five-year capital investment plan,” said City Manager Robert W. Healy in a letter introducing the report to the City Council for its Monday meeting.

The city is planning construction on city schools that bumps up against city debt limits and could cost some $380 million over the next decades, complicating, delaying or threatening other construction and even some maintenance schedules.

The Foundry Works Building, a 52,000-square-foot structure of former manufacturing space at 101 Rogers St., was given the city in January 2012 as part of the rezoning that let Alexandria Real Estate Equities build its lab and office space tall and dense on a 15-acre campus along Binney Street. As part of the deal, 10,000 square feet of the Foundry is set aside for community use – a use that has yet to be defined.

The City Council has been grappling with what to do with the 123-year-old building since June 2012, and in February took the rare step of setting a time limit on how long City Manager Robert W. Healy had to respond with answers on the possibilities and needs of the building from real estate and engineering perspectives. At the end of April councillors agreed to spend $40,000 on a study recommended by Healy.

“It is my strong recommendation that the City Council authorize the sale of this building,” Healy said. “The requirement for 10,000 square feet of community use would be protected in the proposal.”

This may be good news for councillors who were dubious about the city owning and managing a property that could host a diverse and frequently changing roster of arts groups, community services, businesses and startup tech firms – all uses that have vied for space for when the Foundry opens permanently and have urged the council to make it happen. But failures in leasing and maintaining the 13,000 square feet of commercial space on the ground floor at 51-69 First St., which was occupied most notably by the Indochine Restaurant and Veterans of Foreign Wars, has led some councillors to say the city is simply bad at being a landlord.

Among the Foundry building’s problems, the HFMH report says, is a 25-year-old roof that has “reached the end of its lifespan,” as have “most systems” (including a fire alarm system that doesn’t meet code) and a need for repair or replacement of exterior walls. In addition, “the building structure is compromised as regards lateral forces.”

Correcting all that, as well as adding an elevator for those in wheelchairs and other modifications, won’t be cheap for the city, the report says, but would cost a private owner less.

“As a public entity the city is constrained to follow public design and construction procurement statutes,” it says. “This results in a project cost premium over private development.”