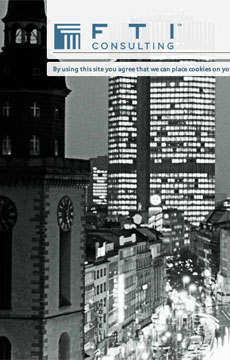 FTI Consulting, an international firm that works in the health care industry, is being paid $225,000 to advise Cambridge Health Alliance.

Trustees of money-losing Cambridge Health Alliance are meeting today to hear eagerly awaited advice from a consultant on how the health care system can improve its finances. Although the Alliance is part of Cambridge city government and gets city funds, neither the meeting nor the consultant’s report will be public.

The finance committee of the Alliance’s board scheduled its entire monthly meeting in closed-door session “for the purposes of discussing strategic planning matters,” according to the notice of the meeting on the Alliance website. Spokesman David Cecere previously said the consultant, FTI Consulting, would present its report to the committee at its August meeting.

Last month, trustees adopted a budget for this fiscal year that foresees millions of dollars in losses. The budget assumed that recommendations from FTI Consulting would save $17 million. At the time trustees didn’t know what the report would say.

The assumption left one trustee so uneasy that she abstained from the vote on the budget, and others acknowledged that there was no backup for the predicted savings.

A union spokesman also expressed anxiety, saying similar consulting work done by other consultants and for other hospitals had resulted in cutbacks.

During the board meeting last month, trustees said the situation would be clearer when FTI’s report was presented to the finance committee at today’s meeting.

The state’s public meetings law, which applies to the Alliance because it’s part of city government, doesn’t allow private meetings to discuss “strategic planning matters” in general. But the state law that created the Alliance in 1996 includes an exemption if disclosure “would likely give an unfair competitive or bargaining advantage to any person or entity.”

Alliance spokesman David Cecere cited that language when asked why the committee was meeting in private. Trustees “deemed that disclosure of the draft report, which includes analyses, evaluations and data, at this preliminary stage would likely give an unfair competitive or bargaining advantage to any person or entity,” he wrote in an e-mail.

The Alliance is paying FTI $225,000 plus expenses, Cecere said. FTI is an international consulting firm that works in the health care industry and other areas, according to its website.

The Alliance is the second largest “safety net” hospital system in the state, serving more poor and uninsured patients than any other hospital except Boston Medical Center. Low Medicaid reimbursements and dwindling state support for the uninsured have kept it in the red, officials have said.

The budget adopted last month estimates the Alliance will lose more than $29 million on core health care operations for the year that ended June 30, and more than $26 million in the coming year, even with the projected savings from the FTI report. Overall losses, which include non-operating income such as $6 million a year from the city to run the public health department, will reach almost $22 million in the year ended June 30 and $19 million next year.

In May, after months of negotiations, the Alliance and Beth Israel Deaconess Medical Center, the Boston teaching hospital, agreed to a clinical partnership. Officials expect that this will help both hospitals take advantage of incentives to form “accountable care organizations” that can provide a complete range of care to patients for one monthly payment.

At the time, though, CHA Chief Executive Patrick Wardell said in a statement that “this partnership alone will not eliminate all our challenges – we still have a lot of work to do.”