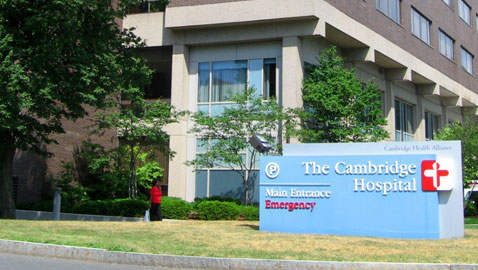 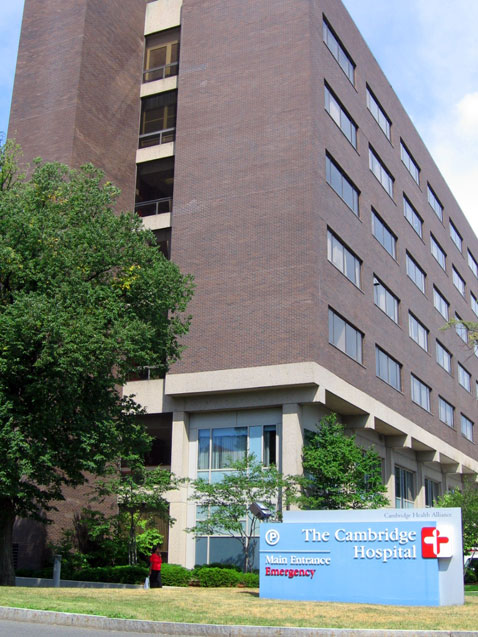 Cambridge City Hospital was founded in 1915 to care for indigent Cambridge residents and still serves many as the three-hospital Cambridge Health Alliance. (Photo: Vlad Tuchkov)

The three-hospital system, formed by the former Cambridge City Hospital, lost $28.5 million on health care operations in the fiscal year that ended June 30, according to the report. It’s better than the $36.9 million loss for 2011, but it continues a persistent pattern of red ink.

In another piece of bad news, the Alliance will be penalized this year for not meeting federal standards on quality of care and patient satisfaction and having too many Medicare patients readmitted to the hospital within a month of leaving. Medicare, which is imposing the penalties on hospitals nationwide for the first time, will deduct 1.38 percent from the Alliance’s Medicare payments for hospital stays – not a big bite, but a bad omen at a time doctors and hospitals will increasingly be paid based on performance.

Alliance spokesman David Cecere, asked for a response, e-mailed a statement he attributed to Chief Medical Officer Gerald Steinberg: that the Alliance is “committed to continuously improving our patient care experience and the quality of care we provide.” He said the Alliance is taking measures “that we are confident will improve our performance” and called the Medicare quality assessment program “helpful in gauging our progress.”

Last year the Alliance had more than 13,300 discharges from its hospitals and more than 664,800 outpatient visits. It’s now the state’s second-largest provider of care to poor and uninsured patients, with about 85 percent of its revenue coming from the state and federal government. It is a major supplier of mental health and substance abuse treatment. And it runs the Cambridge Public Health Department, which oversees tuberculosis surveillance and treatment, flu shots, school health and other community health programs in the city.

“I think they are a critical provider,” said Nancy Kane, Harvard School of Public Health professor and associate dean, and an expert on hospital finance. “The state will always have to take seriously the survival of Cambridge Health Alliance and Boston Medical Center and some others. BMC and CHA are far and away the highest providers [of care to the poor and uninsured]. I think they’re vulnerable, and people don’t want to see them crash and burn.”

Alliance spokesman Cecere declined to make Chief Financial Officer Gordon Boudrow available for an interview on the financial report but did pass along questions for Boudrow via e-mail. In e-mailed responses, Boudrow said the Alliance ended the 2012 fiscal year with ample cash “for a safety-net institution” and, with an overall profit of $44.1 million when nonmedical operations are included, called it “a strong performance.”

“Our weakness is driven from serving a high proportion of low-income and uninsured patients for which reimbursements are poor,” he said. The Alliance must make improvements “that generate income” so it can invest in its buildings and equipment and become financially self-sustaining, Boudrow said.

Founded for the poor

Cambridge City Hospital was founded in 1915 to care for indigent Cambridge residents, in a small building on the same Cambridge Street site the hospital now occupies. The hospital soon lost money then, too. A document at the Cambridge Historical Commission, a report to the city in 1921, lists $76,494 in expenses to treat 1,864 hospital patients, and only $25,586 in revenue.

The Alliance was formed in 1996 when the city helped Cambridge City Hospital acquire Somerville Hospital. Five years later the system added Whidden Memorial Hospital in Everett, which was about to fail.

At the time, “safety net” hospitals such as Cambridge were doing well. The state gave them extra payments routinely because they cared for a large proportion of Medicaid and uninsured patients. And Cambridge City had founded Network Health as a managed care organization to take care of poor people more efficiently and keep them out of expensive emergency rooms and hospital beds.

The Alliance’s fortunes reversed with the passage of state health reform in 2006. State officials started phasing out the complicated payment system for hospitals that served high numbers of the uninsured, reasoning that almost everyone would soon have coverage. Instead, they have put public money into subsidizing private insurance for low-income people instead of paying safety-net hospitals such as the Alliance. The same trend is expected to occur at the federal level.

Cambridge and its sister safety net hospital, Boston Medical Center, have suffered. In 2009 the Alliance cut more than 400 jobs, cut hospital beds – including psychiatric beds – and shifted Somerville Hospital from acute care to an outpatient center. The state has come to the rescue of safety-net hospitals with one-time extra money, but another such injection isn’t expected. The city also gives $6 million a year for running the city health department; that’s likely to continue, Boudrow said. 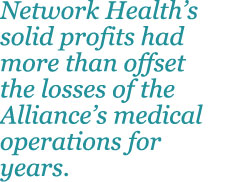 According to the financial report, which disclosed some details of the Tufts deal for the first time, the Alliance got $130 million for Network Health, with a net gain of $50 million. With those proceeds and other nonmedical income, the Alliance as a whole was able to report the profit of $44.1 million that Boudrow cited.

The deal also gives the Alliance unspecified payments from Tufts for three years depending on Network Health’s performance under Tufts. Boudrow did not provide details, but said the Alliance got nothing in 2012 and does not expect any payments this year. 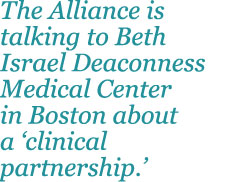 How can the Alliance become profitable without Network Health? Hospital officials say the Alliance aims to become an “accountable care organization,” efficient and effective enough to provide complete medical care for a set payment per patient regardless of what services the patient uses. State and federal officials hope accountable care organizations can help control medical costs under health reform; they can win bonuses from the government as well as make money on their own.

Related to this goal, the Alliance is talking to Beth Israel Deaconness Medical Center in Boston about a “clinical partnership.” If successful, it won’t involve a merger or discontinue services, officials say. Cambridge would need such an affiliation to become an ACO and provide complex care such as open heart surgery. It may also be relevant that Mount Auburn Hospital across town is already affiliated with Beth Israel and many Alliance physicians can admit patients there as well as at the Alliance hospitals.

The Division of Health Care Finance and Policy, the state agency that analyzes hospital finances, publishes profit and loss figures that rank the Alliance near the bottom among the state’s hospitals. The Alliance also gets some of the lowest rates for care of any hospital in the state because it doesn’t have the clout to win higher reimbursement from private insurers.

Its “overall financial resources” and inadequate reimbursement means it can’t buy new equipment, so it must lease, chief financial officer Boudrow told state officials in 2011. Meanwhile, buildings and the rest of the Alliance’s physical holdings keep getting older. And even after lowering its bed count from 510 to 494, the Alliance had an occupancy rate of only 34 percent in 2012. Outpatient visits rose sharply, though, because doctors took on additional patients, extended their schedules, reduced the wait for appointments and tried to refer patients to other Alliance physicians instead of doctors at other hospitals, the financial report says. 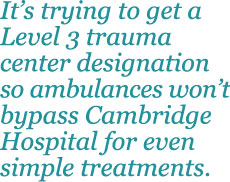 Hospital officials remain optimistic. The Alliance is close to moving all medical records into one electronic system, a change needed so the system can provide comprehensive care efficiently as an accountable care organization. It’s trying to get the Cambridge Hospital emergency room designated a Level 3 trauma center – the lowest level but still necessary to prevent ambulances from bypassing the emergency room even when patients need simple treatment. It could win up to $66 million from the federal government over the next three years by meeting goals to integrate the delivery of care, improve management of patients with diabetes and others who need complex care, and move toward the one-payment-per-patient model, Boudrow said. One of its goals is to improve community health with a stop-smoking program, he said.

The Alliance has 16 work groups tackling different aspects of moving the system to an ACO and having Alliance primary care offices become “medical homes” organized to manage all a patient’s care. It has set up five teams of nurses, social workers and other clinicians to contact patients with expensive conditions who haven’t seen a primary care doctor in a year or are getting a lot of complex care outside the Alliance and get them into an Alliance doctor’s office. This year the Alliance will unveil a plan to break even by 2015 and attain a 2 percent margin the next year, the financial report says. How? The details “are in development,” Boudrow said.

“What they are doing makes sense,” Kane said. If the Alliance can make itself into an accountable care organization, “they may be better positioned than other providers because of relatively lower capital investments and the management expertise developed from delivering services within a tighter budget.”

“They have their work cut out for them in the next two to three years,” Kane said.