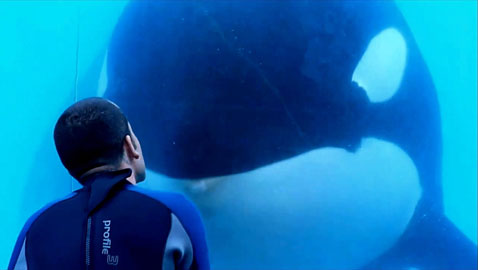 Blackfish: Given the fact a killer whale is probably three times bigger than a great white shark (it is Shark Week, after all) and is an apex predator, why would anyone want to get in the water and do stunts with them? That power and prospect adds to the magic of Sea World shows – until they turn deadly. Gabriela Cowperthwaite’s powerful documentary turns the camera on the unseemly underside of the marine amusement park, showing prolonged attacks as trainers are dragged down and a rapt audience gasps, with nothing anyone can really do. The union of wildlife chronicle and commercial history of aquatic theme parks melds with haunting profundity. At the Landmark Kendall Square Cinema, 355 Binney St., Kendall Square.

Grizzly Man: Werner Herzog, who made such classics as “Aguirre: Wrath of God” and “Fitzcarraldo” in the ’70s and early ’80s, meandered about in acting and other ventures for nearly 20 years before settling down and telling this fascinating tale about an eccentric who, every year for more than a decade, lived among grizzly bears during the season preceding hibernation. What Herzog uses to weave the captivating yarn together is found footage from Timothy Treadwell’s camera, including the final roll in which Treadwell is mauled and eaten by a bear. Herzog’s thick German accent and acute, but not intrusive, narration help shape a portrait of a man who walked with giants and played with fire.