Dukakis is in charge again at Sept. 27 forum for City Council candidates 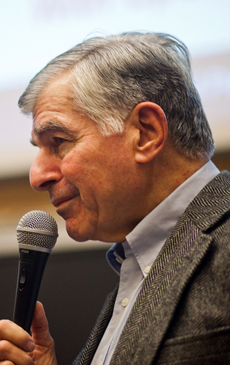 Dukakis is in charge again at Sept. 27 forum for City Council candidates

Dukakis, 79, was twice governor of Massachusetts, from 1975-79 and from 1983-91, during which he ran for president in 1988 against George H.W. Bush. A Brookline resident and Harvard Law graduate, he teaches public policy, health policy, government and public management at Northeastern University, which maintains a Dukakis Center for Urban and Regional Policy.

The event begins at 7:30 p.m. Sept. 27 and takes place at the Dante Alighieri Society Center, 41 Hampshire St., Kendall Square. It is free and open to the general public, and the Planning Team said Cambridge Community Television will be recording.

To submit a question for the candidates, or for information, call Joseph Aiello at (434) 249‐5494 or send e-mail to joseph.aiello@gmail.com. Candidate questions will be considered for use.