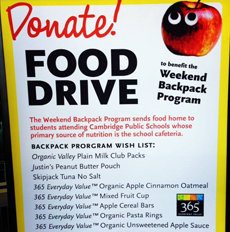 In addition to a Sept. 17 fundraiser, Whole Foods grocery stores in Cambridge have been holding a food drive for students with food insecurity.

With 208 homeless kids in Cambridge Public Schools and even more considered “food insecure,” parents and educators are patching together efforts to raise awareness and have fewer going home hungry over weekends and holidays.

City councillors were introduced Monday to one program nearing an important fundraiser: a Weekend Backpack Program, launched last year by Tobin school parent Alanna Mallon, that has been helped by food drives at local Whole Foods Market and is expecting even more help after Sept. 17, when the chain’s three stores in Cambridge donate 5 percent of net profits from sales to the program.

Whole Foods’ involvement began with Mallon applying for a donation to help “send students who had little access to food on the weekend home with a backpack of food to keep them nourished and ready to learn on Monday mornings,” said Claire Davies, a Cambridge parent and community relations director for the chain’s Cambridge stores. “Whole Foods gladly donated milk to this program, which provided for 22 students.”

But the program has grown to five schools this year, expecting to help up to 85 students each weekend during the school year, Davies said, urging council support of the program and a commendation for Mallon. 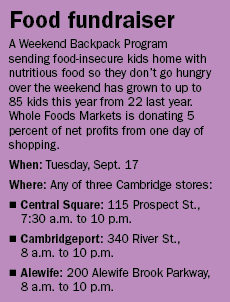 This year 45 percent of the district’s roughly 6,000 students are getting free or reduced-price lunches. For some, their “primary source of food is the public school cafeteria,” Davies said. Hearing such statistics some years ago was “the first time I saw the question about food selection and nutrition within the context of just having access to food.”

The program sends two nutritious breakfasts, lunches, milk and fresh fruit home with its kids at the end of school Friday – five pounds of food, none of which needs cooking, that travels discreetly in student’s backpacks.

Mallon, who followed a national model in starting the backpack program through the Friends of Tobin nonprofit group, said the success locally has been clear:

Fifty percent of the students participating in the program had medium to high absentee rates prior to the launch. By the end of the year, their attendance was up for all days of the week, especially on Fridays – food pickup day. Increasing attendance on Fridays means the students pick up their weekly homework bag, take spelling tests and participate in other school activities, setting them up for a better chance at academic success.

“There was also an increase in school engagement from the participating families – attending community events such as Literacy Night, International Night and other after-school gathering,” she said in an article for TakePart.com. “Students and families came into more meaningful contact with the school counselors, who now have a better sense of their needs. For example, one counselor was able to get a child signed up for a free summer program simply by speaking to the mother every week as she picked up her children’s food.”

While the Tobin school has some 22 students who are food insecure, it has no homeless students, according to data presented to the School Committee last week by Melody Brazo, the district’s school climate coordinator and LGBT family liaison. It and the Haggerty elementary school are the only ones in the district without kids lacking “a fixed, regular and adequate nighttime residence.” (A census taken in January showed Cambridge with 537 homeless people, including 61 families in emergency shelters or transitional housing – a total of 171 adults and children.)

A third of the district’s homeless kids are at the high school, Cambridge Rindge & Latin, said Brazo, showing data from June. Another 11 percent, or 23 kids, are at the Cambridge Street Upper School, while there are students in the low double digits at each of the other three upper schools, as well as at two elementary schools: Peabody and Kennedy Longfellow. The remaining schools have as many as eight homeless kids and as little as one.

Brazo was present because the district had received about $30,000 from the McKinney-Vento grant. “It’s not a huge grant,” she said. “It’s really for the purpose of helping to make people aware of the issues homeless kids face and to tighten up our ability to help those kids.”

Member Alice Turkel, though, noted that the chart presented by Brazo cut off at the 11th grade, and wondered if it wouldn’t make sense to assume the number of homeless students was even higher than the 208 it accounted for. “Our numbers are really accurate now,” Brazo said, but did lack a year because of the timing of the count and its presentation. “I think your guess is right.”

“That’s a huge portion of the population,” Turkel said, suggesting the number was closer to 230.

The McKinney-Vento money is used fund homeless service coordinators, training and supplies for each homeless student and their families, Brazo said.

He asked for suggestions on what the committee could do to support homeless students – up to having a 6:30 p.m. dinner daily for them and their families – and other committee members also identified possible ways to help, including putting social workers in schools to serve the population and reconsidering the application of automatic fails for high school students who might be traveling from far-away shelters or transitional housing. Students are failed regardless of grades if they get 12 unexcused tardies or four unexcused absences.