‘Prisoners’: Kidnap flick holds you with top actors, high tension for much of run 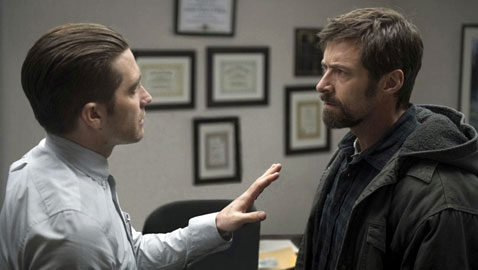 ‘Prisoners’: Kidnap flick holds you with top actors, high tension for much of run

The title “Prisoners” is multifaceted in meaning, referring primarily to two young girls who are kidnapped off the street of a rural Pennsylvania town on Thanksgiving Day, but also to the parents of those kidnapped girls who grow frustrated with the sputtering police investigation and take matters into their own hands – they take a person of interest captive – as well as the homicide detective who is tripped up constantly by the interfering parents and an unsupportive higher-up, and the burnt-out working-class town that has suffered through decades of tragedy. 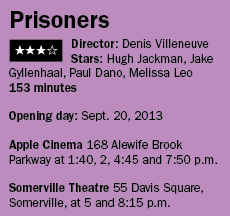 It’s a broad net, probably broader than screenwriter Aaron Guzikowski (the Brockton native who penned “Contraband”) intended, but the material in the hands of Denis Villeneuve (whose haunting 2010 exploration of arcane family roots in the Middle East, “Incendies,” garnered an Academy Award nomination) is narrow, focused and rife with tension. That’s the gift and bane of “Prisoners”: eternal, dark bleakness. Take either of David Fincher’s serial killer flicks, “Zodiac” or “Se7en,” and you’d have a good idea what Villeneuve is shooting for.

As much as “Prisoners” is a film for the Canadian filmmaker to work with a big budget and break into the mainstream, it’s also a showcase for Hugh Jackman to do something other than be Australian or bear metallic spiked claws, and he doesn’t let the opportunity go to waste. Here the affable Aussie plays Keller Dover, a hardworking, recovering alcoholic who runs a small carpentry business and has a survivalist’s stockpile in the basement. We hardly get to know him before his daughter and her friend (Erin Gerasimovich and Kyla Drew Simmons) are snatched off their quiet side street in a flash.

The suspected vehicle, an old RV, gets cordoned off by the police pretty quickly, but it’s empty. The girls are nowhere to be found and the driver, Alex Jones (Paul Dano) possesses the mental facilities of a 10-year-old and can’t give a straight answer. There’s not enough evidence to hold Alex on, and Loki (Jake Gyllenhaal), the lead investigator who boasts a 100 percent solve rate, can’t get any traction as the clock ticks onward and Keller grows increasingly anxious. Throw in a few strange chance encounters with Alex and Keller blows a fuse and abducts him, holding him hostage in an abandoned apartment complex where he begins his own brand of torture-based interrogation.

If the prospect of that sounds unlikely, as the two men are under constant scrutiny and a massive search for the two girls continues, Villeneuve, Jackman and Gyllenhaal sell it well – and they get help in the form of a near catatonic Maria Bello as Keller’s wife and Terrence Howard as the aggrieved father of the other girl who becomes greatly conflicted when learning of Keller’s devious initiative. The plot has some nice underpinnings too that keeps the macabre edginess pinned at high, namely the whisky-pickled priest with a sex offender tag and a few skeletons in his basement and the ghostly wisp in a hoodie who outruns Loki through a maze of backyards, dog pens and freeway as if warming up for a parkour contest. Then there’s Melissa Leo as Adam’s kind, adoptive mother, remaining relatively calm throughout and forever trying to sell the beat-up muscle car on her front lawn.

It all works seamlessly for more than three-quarters of the two-and-a-half-hour running time, mostly thanks to Jackman’s frenetic father always ready to bull down a door and Gyllenhaal’s calm sobriety – the good cop, bad cop that propel the nightmare with human context. But when it comes time to lay the cards down, the order of sensibilities and logic hits a nearly groan-worthy snag.

There’s much to admire in “Prisoners.” It’s just too bad it becomes bound and hobbled by the same rope it uses to pull us in.