‘Free Birds’: Taste of this Thanksgiving item is a bit off, even if you like it dark 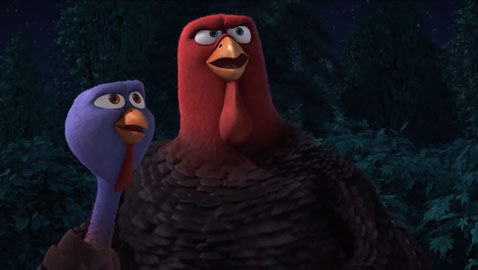 ‘Free Birds’: Taste of this Thanksgiving item is a bit off, even if you like it dark

Poultry and tradition, that’s what’s on the menu in this animated butterball about America’s family holiday and the secret lives of turkeys. You can’t argue with the film’s angle about the big birds wanting to live – after all, how would you feel if all you did was gorge out on death row and pray that your number doesn’t get called as the calendar flips from October to November each year? But rescripting history and featuring death and violence prominently in nearly every frame, that’s a fairly big miscalculation for a kiddie flick. 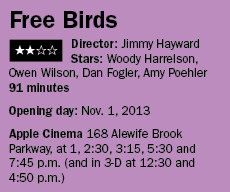 Not that “Free Birds” is all stuffing and no trimmings. The 3-D animation is crisp and vivid and there are some quirky touches wittily infused into the script by writer/director Jimmy Haywood (”Horton Hears a Who” and “Jonah Hex”), the most cheeky and rewarding of which is the inclusion of Facebook humor sensation and former Enterprise crew member George (Sulu) Takei as the voice of S.T.E.V.E., the Space Time Exploration Vehicle Envoy, a top-secret military time machine. Adding to the fun is the presidential first daughter as a willful and rambunctious tyke who suffers bouts of narcolepsy.

What any of this has to do with turkeys and Thanksgiving might seem irrelevant, but rest assured it is all about the birds. “Free” opens amid a flock of nervous turkeys shuttered in a dark barn debating who’ll be next. One intrepid gobbler, Reginald (voiced by Owen Wilson), makes a call for solidarity and for all to repel the oncoming farmers. For his effort he’s offered up as the sacrificial lamb. Luckily, his destiny is a trip to the White House where the Reagan-looking, Clinton-sounding president pardons the young tom and relegates him to the confines of Camp David, where the avian settles into a coddled life of watching a cheesy Latin soap opera on cable and ordering pizza from a stoner delivery boy.

Things can’t get any better, but then Jake (Woody Harrelson) shows up, a flighty feathered agent of the T.F.F. (Turkey Freedom Front) claiming he’s seen the “Great Turkey” and that Reggie must come back across time with him to stop the first Thanksgiving to save all turkeys forever. Reggie thinks Jake is nuts, and he’s onto something – Jake, while big and imbued with platoon leader-like bravado, can’t stream together a single solid conscious thought. Reggie signs on for the quixotic quest reluctantly and, in a bit of happenstance, the two uncover a secret silo under Camp David that holds S.T.E.V.E., who whisks the toms back to 1621, three days before the first Thanksgiving.

You’d think the turkeys of old would be the wild, awkward fliers that grace the bourbon bottles of today, but not so. They’re as earth-bound as today’s doughy domesticated ilk. To evade the settlers’ muskets and dogs, they’ve taken to the trees like monkeys (swinging from vines like Tarzan) and, like gophers, have built a subterranean colony in a cliffside of the Plymouth shore.

Bizarre as this all may sound, there is historical justification for the treatment. From the Smithsonian annals, Edward Winslow, an English leader who attended the first Thanksgiving, wrote, “Our governor sent four men on fowling, that so we might after a special manner rejoice together after we had gathered the fruit of our labors. They four in one day killed as much fowl as, with a little help beside, served the company almost a week.”

For that role, Haywood and company render Gov. Bradford (Dan Fogler) a plump buffoon and Myles Standish (Colm Meaney), a sneering master of the hunt. If your kids are looking for a history lesson from this, be prepared to do mucho explaining.

The hunted birds can be seen as an allegory for the Native Americans, hiding to survive the invading enemy’s superior firepower while they plot ways to reclaim their land and way of life. Actual Native Americans are nearly nonexistent in Haywood’s farcical fantasy, other than the notion that Bradford believes they are the key to reversing Plimoth Plantation’s ills, as the settlers have yet to learn how to work the land and are starving; in one fairly unfunny scene, someone actually does keel over dead from hunger.

Probably the grimmest scene, however, is the flashback to young Jake’s existence in a caged turkey factory, where thousands of birds sit in muted grey cages fattened and immobile. It oddly evokes the Holocaust, which is a just another unsettling juxtaposition of the film. The poults in the “nursery” might educe some “awws” and Amy Poehler as the hen babe with a lazy eye who sets Reggie’s tail feathers on edge endears too, but in the end, this freeform history lesson is a flightless foul.