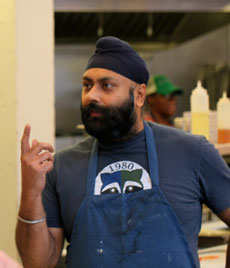 Clover Food Lab is launching the Pushpir sandwich, its first collaboration with a local chef, at its brand-new test kitchen and restaurant in Kendall Square.

The Pushpir sandwich is eponymous – it was developed with help from Pushpir Bhetia, the owner of Guru the Caterer, the Teele Square, Somerville take-out place called “the best Indian restaurant in Boston” by Ayr Muir, the founder of Clover.

“I met Pushpir a few years ago and he started teaching me about Indian food. Customers kept begging us to experiment with Indian flavors. We knew Pushpir would be the best person to guide us on this project,” Muir said. “We’re really excited to reveal what we came up with and get some feedback from the masses.”

Here’s how Clover describes the sandwich:

The Pushpir sandwich, version 1, will include a sauce made from cilantro, mint, jalapeño, orange juice and yogurt; hot deep-fried paneer (a fresh soft cheese), chaat (an Indian street snack made with fried chickpeas, pickled onions, pickled cabbage, and fresh peppers); and two sauces (tamarind and yogurt) drizzled on top.

It’s available from 11:30 a.m. to 1:30 p.m. at the Clover at 5 Cambridge Center in Kendall Square. A limited number of sandwiches are available for pre-order here.