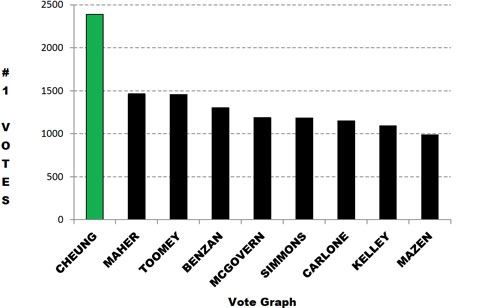 This “No. 1 Vote Graph” showing Leland Cheung dominating the City Council election made me admit Cheung should be mayor, reflecting the will of the people at the ballot box. Sadly, in Cambridge, the people are not allowed to elect the mayor. The council elects our mayor, with Cheung and David Maher being the top candidates this year.

Elections are not won by accident. Cheung’s hard work led to nearly a 20 percent increase in No. 1 votes while every other incumbent’s votes decreased and two were un-elected. Cheung’s votes came from citywide support, while 70 percent of Maher’s votes came from just six of the city’s 34 precincts. 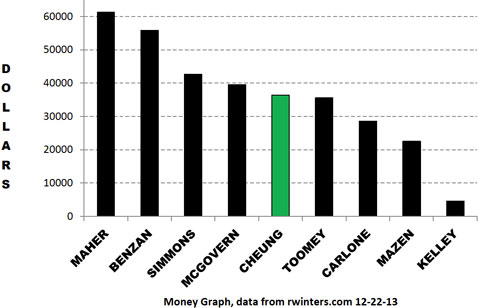 Cheung did not buy the election. Quite the opposite. This “Money Graph” shows Cheung exactly midpack in spending. Maher spent nearly double what Cheung did to come in a distant second by the sixth-largest gap in No. 1 votes in the 75-year history of our city’s unique proportional representation voting system. Cheung achieved the second-lowest cost per vote of the elected candidates.

To be sure, money is not everything, but together with all the other numbers, the remarkable margin of victory in the “popular” vote, the pervasive citywide support and being the only incumbent to increase in votes while all others decreased says that, in a democracy, Cheung would be mayor.

He also introduced a “good government” rules change to publish the city manager’s contract before it is voted on, gives out his personal cellphone number and answers his own emails – he works at openness.

Maher does have far more experience with the schools, significant as the mayor chairs the School Committee. But Maher does not practice openness. He got the previous city manager’s last contract voted on before anyone could read it, especially the public. Before the 2011 election, Cambridge Day described Maher as mayor breaking rules and engaging in “profoundly undemocratic behavior.”

call[ing] the alleged behavior “particularly inappropriate” because the council reverted to not just one, but two of the more “sophisticated” ways public bodies sometimes violate the law.

Let’s change the law to allow us to vote for our mayor. Start by emailing me at [email protected]. But today, if you believe in democracy and that the election expressed the will of the people, call your councillors right now and tell them to vote Leland Cheung for mayor – he worked hard and got a lot more votes, and that means he is listening to a lot more of us, the Cambridge voters.