‘Magnetic’ trailer whets appetite for nice, simple film about the end of the world 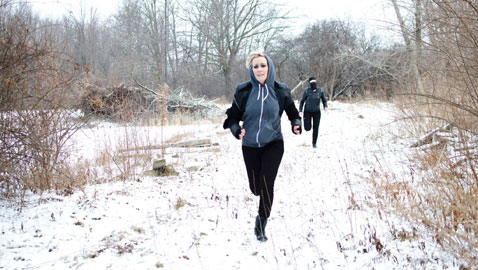 ‘Magnetic’ trailer whets appetite for nice, simple film about the end of the world

After gathering a cast of 10 for a rushed shoot of the intricate script of the horror film “Ten,” Sophia Cacciola and Michael J. Epstein have pared things down for their sci-fi second film, “Magnetic.” 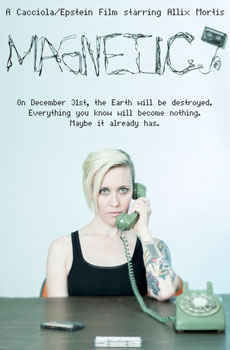 The teaser trailer, unveiled Wednesday, shows just how pared-down things get. Aside from a bunch of sheep, there appear to be only two people in the movie – star Allix Mortis and a mysterious, black-clad figure – even though the flick starts in New York City before retreating with Mortis’ character, Alice, to her rural upstate hometown.

The prolific Cacciola and Epstein, who wrote, directed and produced as well as contributed to the soundtrack as part of the ad-hoc band Night Kisses, have given “Magnetic” an extremely creepy setup: Having fled her failed life in the city with little but some mixtapes, Alice “finds a job calling people to inform them that their children have died. It does strike her as a little unusual that the office is hundreds of feet underground in a former bunker under a sheep farm, but her life has drained her of virtually all emotional response.”

Wherever the script goes from there, it looks like it goes big. The filmmakers are publicizing this blurb suggesting the escalation in the action:

On December 31st, at 11:58:07 PM Coordinated Universal Time, Earth, the third planet from the star sol will have its atmosphere ripped to shreds by an unlikely combination of magnetic forces from the largest directed coronal mass ejection in the history of the galaxy and the rapid seconds-long polar reversal of the geomagnetic field. These forces will shatter the protective layer on the once stable, life-sustaining planet in an instant. Everything we know will become nothing. Maybe it already has.

Still, budgeted at about $10,000 (“We’re still paying off debts for ‘Ten’ [and] have designed this film to be an inexpensive followup that can keep us working to make movies that really interest us without going bankrupt,” the filmmakers write on the film’s website), Cacciola and Epstein are keeping the action more conceptual than combustible.

“Ten” is being submitted to film festivals, with Cacciola and Epstein expecting an early 2014 premiere but “a late-2014/early-2015 release.”