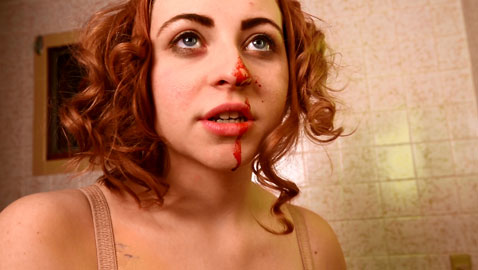 Those awesome exploitation horror flicks of the 1970s are getting the Michael J. Epstein and Sophia Cacciola treatment, as you can see from the teaser trailer the team just released.

It’s called “Ten” – a Kickstarter-funded, self-filmed flick being edited for a likely release in the second half of the year. The film stars Cacciola, as well as area creatives such as burlesque dancer Porcelain Dalya and poet Jade Sylvan alongside actors such as Molly Devon and Kerri Lynch. It’s based on the legendary 1972 Spektor Island Massacre, which you’d be more than forgiven for not remembering.

Epstein and Cacciola are obsessives. They have a half-dozen bands between them, each with a specific focus (including the “Prisoner” television show tribute Do Not Forsake Me Oh My Darling, for which the spy couple made a video called one of the “Top 10 Creative Videos” for 2011 by Time magazine), but Epstein had one more obsession that wasn’t getting served.

“I’ve been obsessed with low-budget movies since I was a young lad and have always dreamed of using the B-movie aesthetic to make a film that is approached completely seriously,” Epstein said on the Kickstarter page, which raised $12,001 from 258 backers, overshooting an $11,000 goal.

The painstaking devotion and outright obsession brought to that “Prisoner”-themed video has been applied to “Ten,” which Epstein calls a “a collectivist, post-exploitation psychological thriller” that takes a classic horror-movie trope as its basis: the isolated group of people being picked off one by one and suspecting that one of their own could be the killer. (It also features nearly a shot-for-shot recreation of the “Psycho” shower scene.)

The pitch for the movie: “On a cold December afternoon, 10 women arrive at a mansion on Spektor Island, famed for years of reported hauntings and strange activities. Will they live through the night?”

That goes all the way back to “Ten Little Indians,” which Epstein acknowledged as inspiration for the original version of “Ten”– an entry in last year’s Brattle Theatre’s annual Trailer Smackdown, in which all filmmakers use the same theme (in this case, “ten”) to make trailers for nonexistent movies. The original:

Epstein and Cacciola didn’t win, but they got the Curator’s Choice award and found the process as fun as their video productions and entry into a recent 48 Hour Film Project.

“In the process of doing all these short films, it became apparent that I ultimately wanted to make a film on a bigger scale,” Epstein said. “We had so much fun making this trailer that when the people involved in it asked if we could do the full version, I sort of thought, ‘Okay, let’s give it a shot.’”