‘The Lego Movie’: It’s well-assembled, glossy and fun for all ages, to the surprise of no one 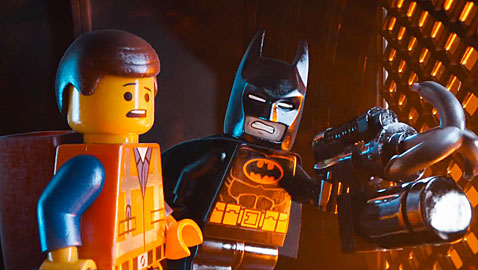 ‘The Lego Movie’: It’s well-assembled, glossy and fun for all ages, to the surprise of no one

“The Lego Movie” is sharp, smart and clicks along snappily, at least for the first 80 minutes of the 100-minute running time. It’s also packed with a Lego case full of gags that cut many a wicked laugh. It’s so barbed and adult-oriented in texture and content that it flirts with the likes of “Team America: World Police” and “South Park: Bigger Longer & Uncut,” yet holds the family-friendly line – a pretty impressive feat. 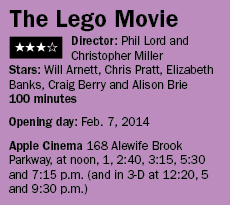 Like those two adult-aimed animated features from Matt Parker and Trey Stone, “Lego” is erected on a flimsy premise: Somewhere in an alternate universe where everything – the people, the buildings, even the ocean – is made from the plastic, snappable brick that has been a childhood staple for decades and generations, a megalomanic threatens to wipe everything out with a singular, sinister doomsday device. Granted President Business (voice of Will Ferrell) is no Saddam or Kim Jong-il, but he is every bit their equal in the realm of being a controlling douche with zero regard for free expression and harboring a constant need for self validation. Also like Saddam, Prez Biz – then Lord Biz – stages a quick, nefarious coup to displace the wise wizard Vitruvius (voiced by Morgan Freeman, who possesses the sagest intonation in film these day) by blinding him and seizing control of the Lego lands from the Master Builders.

If you’re of the order of Master Builders, you’re a Lego-ized version of Batman (Will Arnett), Superman (Channing Tatum), Abraham Lincoln (Will Forte) or some other real-world or fantasy great and can build a spaceship or skyscraper out of plastic scrap in less than 20 seconds, which comes in pretty handy when you need a submarine to escape a barrage of stormtroopers. The hero of the film, however, isn’t Bruce Wayne’s snap-together alter-ego (though he’s a big part of it, and pretty trippy too) or some other manly incarnation, but generic Emmet (Chris Pratt), a lowly construction worker who, according to Vitruvius’ prophecy, is the “Special” – the uber Master Builder who can save Lego land because he (accidentally) possesses the “piece of resistance” (say it like the French would), which is something of a pen cap that’s glued to his back.

Needless to say, a lot of pieces are thrown at the audience, but what keeps “Lego” moving is the daft retooling of cherished icons. Emmet, who’s so plain and by-the-book and has Owen Wilson’s ditzy nice guy schtick down rote, has his own Obi-Wan in Vitruvius (the vacuous mind-meld scene is the apogee of the film’s droll wit) and a Trinity-styled bodyguard in the form of a no-nonsense ninja warrior who goes by the moniker Wyldstyle (Elizabeth Banks). The robotic minions Prez Biz unleashes on Emmet and his posse, which he refers to as his “micro managers,” are Lego-imaged seekers from “The Matrix” films. “Star Wars” also gets plenty of raucous send-ups, as does “The Pirates of the Caribbean.” The weapon of mass destruction turns out to be something called “the Kraygle” so you can also rest assured that the utterance of “release the Kraygle” will factor in at some crucial point. And in there too for good measure, Liam Neeson lends his voice as Prez Biz’s main enforcer, Bad Cop/Good Cop. The timing of his split personality play (a spin of his head dials up the opposing id) is handled with spirited perfection.

Phil Lord and Christopher Miller, the creative team who helm the film and have a hand in the script, feed off each other with boon-yielding results (bad director/good director?), and whatever means they employed to conjure up the block-like Lego animation texture and have it permeate throughout in such brilliant 3-D pop raises the art of computer animation to a new level. Their collaborations on “Cloudy with a Chance of Meatballs” and the live-action “21 Jump Street” proved their skills in animation and deft comedic pacing, and here they get to fuse those talents again.

If there is one place the wonder twins don’t quite connect, it’s the clunky resolution. They try to go too big in scope and ambition, and while it’s a well-intentioned and nostalgic reach, it’s like trying to top a tower of bright scintillating plastic with heavy, beat-up wooden blocks. The film’s snarky anthem, “Everything is Awesome,” echoes the commercial/conformist satire with infectious synthesized pop best encapsulated by the overpriced of a cup of joe ($37) and consumers’ eagerness to pay it.