To get to slam-dunk contest, Lesley senior Kaufman needs votes to complement skill 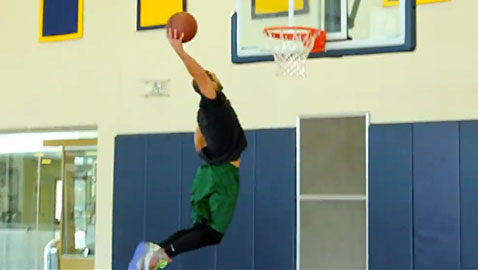 To get to slam-dunk contest, Lesley senior Kaufman needs votes to complement skill

Could Lesley University senior Mike Kaufman have the best slam-dunk in college basketball?

Maybe. The 6-foot, 190-pound guard has a video filled with spectacular and stylish moves that was enough to win a spot among 16 players from around the country in the first round of State Farm’s 2014 College Slam Dunk & 3-Point Contest – and if he survives the five-week Dark Horse Dunker leadup contest he’s going to Dallas in April to show how he stacks up against Division 1 players. ESPN will televise the event at 9 p.m. April 3.

But between the video that got him in and the Dallas shootout, Kaufman can’t actually dunk his way to success. He has to rely on daily Facebook votes from supporters here and in his native Boca Raton, Fla., and from people blown away by the skills they see when comparing videos at the contest site. Here’s his:

In the first round of the contest, Kaufman took out Eastern Michigan’s Glenn Bryant 83 percent to 17 percent. This eight-player second round is proving tougher: As of Thursday he had 51 percent compared with the 49 percent of votes for Eastern Kentucky’s Marcus Lewis.

“It’s really who has the best following, and in the second round everyone’s getting involved,” Kaufman said Thursday. “I said, ‘I’ve got to start reaching out.’ I’ve been all over social media, but it’s really close right now. I have a slight lead, and I feel like he’s making a push.”

As odd as it is to say it, though, this slam-dunk Facebook popularity contest is no game. Not to Kaufman, a business management major who knows intimately the career possibilities seized by previous winners – including one who went on to play with the Harlem Globetrotters, make endorsements and invest in ongoing business success.

“This is a huge dream for me. I’ve been watching the contest since 2004 and never thought I’d have a chance to be in it,” he said. “It really could change my life.”

“And of course it’s fun,” Kaufman said. “I love dunking.”

Click here to go the Facebook contest and vote for Kaufman. Voting in the current round runs through Sunday; voting in the semi-finals starts Monday; championship voting starts March 10; and the winner is announced March 17.