‘300: Rise of an Empire’: Black Sabbath, CGI and slo-mo as Greeks fight Persians 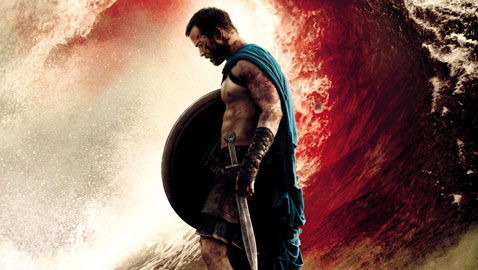 ‘300: Rise of an Empire’: Black Sabbath, CGI and slo-mo as Greeks fight Persians

Probably the greatest thing about Zack Snyder’s “300” besides hearing Leonidas (Gerard Butler, with his CGI-enhanced six-pack abs) proclaim “This is Sparta!” and kick one of Xerxes’ emissaries down a bottomless well, was the hip, infectious trailer of half-naked Spartan warriors assailing the vast Persian army to the manic techno beat of Nine Inch Nails’ “Just Like You Imagined.” The movie itself was overload, more of the same, slowed by plot, reason and redundancy. Plus it’s history, so it’s not like you’re going to have a “I didn’t see that coming” moment, even with Frank Miller’s graphic novel “Xerxes” driving the game. 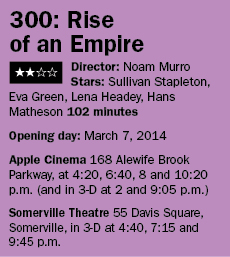 With “300: Rise of an Empire” you pretty much get the same, except a slightly different slice of history and that kick-ass thumping song the trailers cut to happens to be Black Sabbath’s “War Pigs.” The plus is that you can see all the computerized arterial spray in 3-D, and I’d recommend that you do, especially to see Xerxes (Rodrigo Santoro, returning to the role) perched atop a sky-high ziggurat and looking out over his minions. If you have a twinge of acrophobia, your stomach will likely flutter, or something more acute.

The minus is that the script, written in part by Snyder, is porn-flick awful. “You fight harder than you fuck,” Artemisia (Eva Green from “Casino Royale”) snarls at Athenian general Themistokles (Sullivan Stapleton) during combat. And earlier, when Themistokles ventures to Sparta to enlist their remaining warriors’ swords after their “300” guard has fallen, he’s besieged by Leonidas’ wife, Queen Gorgo (Lena Headey). “Are you just going to stand there with your cock in your hand,” she snaps while he watches Spartan men grapple.

Poor Themistokles. Women everywhere are sexually harassing him and the stodgy old guard in Athens wants to acquiesce to the oncoming Persians.

The storyline of “Rise of an Empire” takes a long time to sort out. Part of that’s because the action takes place before, during and after the testosterone-fueled battle of Thermopylae in “300,” yet the film does everything to avoid showing Butler’s mug (his image is used scantly, and he’s not listed in the cast). The preamble, delivered with histrionic flare by Queen Gorgo, sets the stage for the long brewing Greco-Persian conflict, recalling Themistokles’ victory over Xerxes’ father, Darius, at Marathon some 10 years earlier and the boy’s subsequent rise to power aided by the witchy Artemisia, who assassinates any and all in the way of her transforming the malleable lad into a war-mongering “god-king” intent on the annihilation of the Greek empire, which was responsible for (and atrociously so) the demise of her kin.

The historic web of hate and revenge runs deep and is played to its theatrical fullest. Artemisia, clearly not impeded by any glass ceiling, helms the Persian navy and for the bulk of “Rise of an Empire” engages in a bloody maritime game of chess with Themistokles, pitting the bravado and might of the Persians against the cunning ranginess of the outmanned Athenians.

The film’s director, Israeli-born Noam Murro (whose most notable other credit is the 2008 Dennis Quaid dramedy “Smart People”) is hardly noticeable, or I should say, he carries on in as if it were Snyder behind the lens. Given that, there’s the requisite ludicrous sex scene as well as the brilliant combat choreography embossed and underscored by slo-mo so you can see sword sever ligament and limb in graphic detail or watch an intrepid warrior, blade brandished overhead, hurl himself off a cliff and float downward, as if a feather, to the deck of an enemy ship – where the camera snaps back to real time just in time for a head-bashing stroke. And of course, there’s plenty of CGI-rendered metropolises, war elephants and galleons, so much so that the brilliance of one gets lost in the vast overuse. Xerxes too seems to have gotten a digital upgrade, appearing more buff and formidable than the angry eunuch he was in “300.” In this “companion” sequel he looms so large and imposing over men that he calls to mind the large, blue Dr. Manhattan from Snyder’s under-appreciated “Watchmen,” sans the luminous hue and awash in gaudy gold glitz.

Much of the silliness of “Rise of an Empire” can’t be faulted on Green or Stapleton. They’re trapped in two-dimensional roles inside an arcade game movie. Sword-and-sandal epics have fared far better when putting character first. Take “Spartacus” or “Gladiator,” or even Neil Marshall’s gritty mini-epic, “Centurion.”

As far as history goes and the box office dictates, there’s plenty of room for a sequel. The ending almost commands it. In another eight years, we’re likely to see “300: Xerxes – Bigger, Better, More Berserk.”