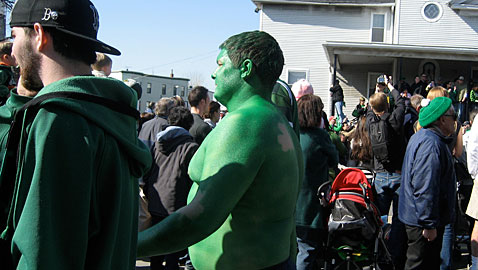 This past weekend saw the start of daylight saving time for the year, in which everyone set their clocks an hour ahead Sunday morning. Dan Crohn, a Boston comedian (whose website  is here) looked on the bright side, so to speak, of that federal institution:

I didn't lose an hour. I was going to waste it anyway.

Also arriving this weekend with daylight saving time and slightly warmer weather was some celebration of St. Patrick’s Day, one of our most alcoholic holidays, although it is actually March 17. Cambridge’s Christine Cuddy noticed:

And so did a fellow Cantabrigian comic, Mike Zakarian, but with a different outcome:

Positive the idea of the "Walking Dead" spawned from Sunday grocery shopping experiences.

Even a hint of spring in Boston brings people outdoors, not just zombies and shoppers. Cambridge’s Scott McLaughlin knows it:

Speaking of “out,” in Boston, debate over including gays and lesbians in a St. Patrick’s Day parade seems to be as much a tradition as the parade itself. Dave McDonough, a Boston comedian, has seen the debate too many times:

Brett Johnson, a Cambridge comedian (whose website is here and appears in the 8 p.m. March 16 show at The Comedy Studio), has more personal issues on his mind, such as:

John Tullar, a Somerville comedian, has far less personal issues on his mind.

Why is six afraid of seven? Because seven is bigger. It's a larger number, you see.