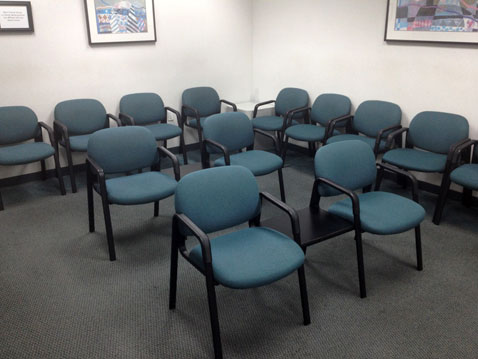 The number of discharges from hospital beds, a measure of inpatient volume, is off almost 8 percent from budget goals for the first seven months of this fiscal year, from July 1 to Jan. 31, a performance report provided by the Alliance says. It’s also almost 4 percent below last year’s figures for the same period.

Outpatient visits also fell short of expectations: off 5.4 percent for the first seven months of this fiscal year and behind last year’s figures by 1.7 percent. Notably, emergency room visits also lagged behind goals, by 5.4 percent, and psychiatric and psychology sessions, the Alliance’s strong point, were 7.4 percent below budget goals.

The Alliance, which serves more poor and uninsured patients than any other hospital system except Boston Medical Center, has been losing money for years. It and other “safety net” hospitals were hurt by the state’s health care reform legislation intended to provide health insurance to almost all Massachusetts residents. State officials assumed the safety net hospitals would no longer need special aid because most of their patients would be insured, but that hasn’t worked out.

The Alliance expects to lose more than $26 million on health care operations this year, even if it achieves anticipated savings of $17 million outlined by a consultant. The system has not disclosed details of the savings plan.

At a March 3 meeting of the Alliance board of trustees’ finance committee, Alliance Chief Medical Officer Dr. Assaad Sayah said his staff is mounting a “major restructuring” of primary care to increase volume, among other improvements. “A lot of it is going to go to the core of how we do business,” he said.

“We need to look at how patients access us, how easy it is to get an appointment,” Sayah said. Previously, he said, supervisors tried to make doctors more accessible by asking physicians to “sprint” when necessary. In the future, “we will continue to work hard but not at a sprint.”

An Alliance physician at the meeting, Dr. Laura Sullivan, medical director of the hospital system’s Malden Family Medicine Center, said the new system will make it “much easier to get an appointment, not because of a bunch of heroics, which is what gets done now.”

Asked for more details, Alliance spokesman David Cecere said the restructuring effort involves “standardizing the operations at all of our sites,” including simplifying how appointments are made and how clerks and other non-physician workers answer telephones and support doctors.

Alliance officials also want to make it easier to schedule appointments with specialists by having the patient participate so the time is convenient, Cecere said. This should reduce time spent in rebooking appointments as well as no-shows, he said. “In addition to being more efficient, this practice will be more patient-friendly,” Cecere said.

It’s not clear if a new, privately owned medical office that plans to open next month in Inman Square – across the street from one of the Alliance’s primary care offices – will take business away from the Alliance. Carewell Urgent Care, which offers same-day appointments to patients with non-life-threatening conditions such as injuries, colds, fractures, cuts and allergic reactions, does not see itself as in competition with doctors and hospital emergency rooms, a spokeswoman said.

Carewell is unusual among urgent care centers in that it accepts two Medicaid managed care plans: Neighborhood Health Plan and Boston Medical Center HealthNet. It also accepts Medicare but does not have contracts with Medicare managed care plans.

Asked whether the Alliance expected the Carewell center to compete with or have an impact on its own primary care services, Sayah didn’t answer directly. Instead, he said the Alliance strives to “provide the highest-quality care and an exceptional experience to our patients, many of whom are underserved and face barriers to care.”

Alliance officials knew about Carewell’s plans in Cambridge, but “our focus is on our work,” Sayah said.