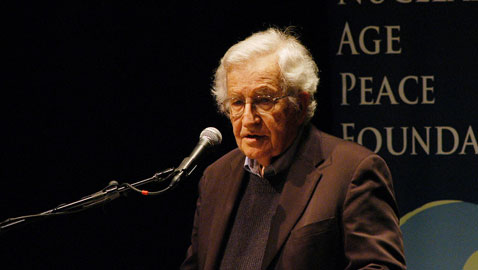 As the city’s longtime leading intellectual and well into his 85th year, Noam Chomsky could be forgiven for slowing down a little, but instead the professor emeritus at the Massachusetts Institute of Technology seems as busy as ever – and has a hometown speaking engagement next week.

Chomsky is scheduled to speak 6 p.m. Tuesday at the Cambridge Main Library on foreign policy, which could encompass any number of topics. His recent focuses have included climate change (the topic of his speech at the PEN World Voices Festival on April 28), the crisis in Ukraine and Crimea, the homeless (as part of a documentary that includes another prominent Cambridge intellectual, the late Howard Zinn) and nuclear weapons and disarmament.

Chomsky is widely described as the father of modern linguistics and has written and lectured on philosophy, intellectual history, contemporary issues and politics. He joined the faculty at MIT in 1955 and, given the scope and energy of his scientific and political efforts, at one point in 1992 was called “the most frequently cited person alive, and one of the eight most frequently cited authors of all time” after a dozen-year tabulation of writings in the arts and humanities.