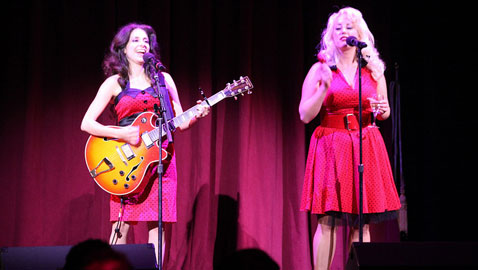 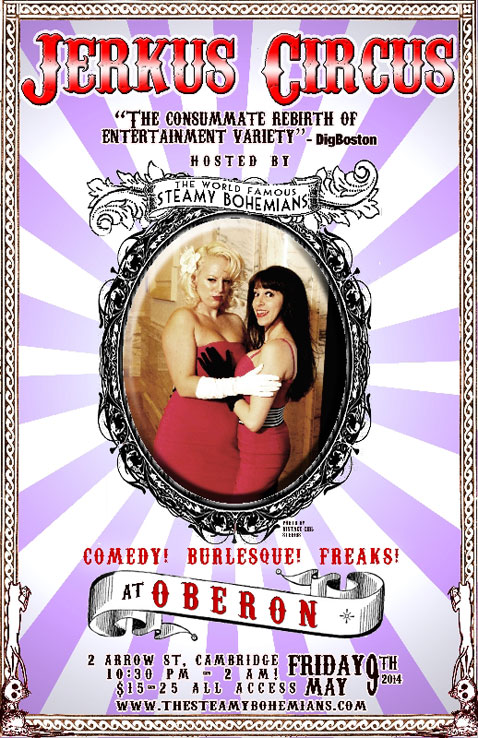 Just as Greater Boston’s taste for performance art rock leads back to the founding of The Dresden Dolls in 2000, its neo-vaudeville movement owes a debt to Jerkus Circus, the weirdo variety show that cavorted through Boston, New York, Providence and Worcester between 2005 and April 2011.

Founders Niki Luparelli and Lainey Schooltree are bringing Jerkus Circus back Friday with its signature mix of music – together Luparelli and Schooltree are known as comedy songstresses The Steamy Bohemians – and comics, burlesque and sideshow oddities including The Human Floor (you and lots of other people can stand on him) and The Human Knot (who can fit his body through a squash racquet and perform other uncomfortable tricks).

The motivation for running away again to form a circus after three years was simple.

“There were some dates available at a place we love. I talked to Lainey and she was on board. The Jerkus rides again, why not?” Luparelli said Thursday.

“Every time we hang out, it’s, ‘We should do more stuff together!’ When opportunity presented itself, we were totally down,” Schooltree said. “But it’s a lot of work.”

Friday’s show will a bit of a test for Jerkus Circus, which started out as unique but inspired a scene and similar events that drew away not just performers, but a limited pool of audience members – a situation Luparelli and Schooltree stumbled into again Friday by locking in a date at the Oberon theater far in advance. The comedy lovers among the Jerkus Circus audiences could be drawn to the Women in Comedy Festival, and the music lovers in the crowd could head to Central Square for a Walter Sickert & the Army of Broken Toys show.

What neither those shows nor Jerkus Circus’ variety competition has, of course, is Luparelli and Schooltree, who bring serious musical skills to a finely honed, sexy comedy act that has had too little exposure (wink) while the pair explored other projects over the past years.

“I wouldn’t want April 2011 to be our last Jerkus ever. We get funnier every year,” Luparelli said.

Their own come-on to audience members is better than journalism:

Longtime loves! It’s been a long time. We’ve missed you. We miss your body. We’ve missed putting together crazy shows for you. And we’re hoping we can lure you back to one more party starring some of our favorite Jerkus All-stars.

Prodigal potheads Niki and Lainey return to ruin another weekend with the late show that accidentally touches your boob, shrugs and says “You’re welcome.”

Jerkus Circus, also known as “Jerk du Soleil,” is the award-winning vaudeville show that will steal your heart, your wallet and probably make out with your girlfriend. Called “haute vaudeville” by the Boston Phoenix and named “Best Nouvelle Vaudeville” in its Best of 2009 readers poll, Jerkus Circus has an irreverent and individualistic charm. Featuring wildly diverse performance artists, uniquely hilarious comedic acts, pasties, drug references and all your favorite swear words. Created, produced and hosted by The Steamy Bohemians. Watch us channel the gods of chaos! Our struggle will seem effortless. What song will Lainey forget how to play? What will Niki pull out of her boobs? There’s only one way to find out. Come see hilarious comedians, scary weirdos, sexy dancing and fabulous music.