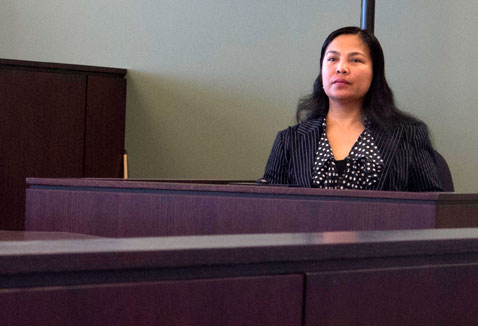 Gloria Law testifies May 5, the opening day in court for her lawsuit against the city. (Photos: John Hawkinson)

After four days of trial and four days of deliberation, a jury Thursday found in favor of the city on several claims in the employment discrimination case of Gloria Law v. City of Cambridge. Law is a former junior accountant with the Cambridge Police Department; she worked there from July 1998 to December 2009.

Law alleged that the city had discriminated against her because of her national origin, which is Filipino, and retaliated against her for filing a complaint with the Massachusetts Commission Against Discrimination. Law accused three coworkers, including her supervisor, of workplace harassment and repeatedly saying “I hate Filipinos”; all three took the stand during the trial and denied the allegations. 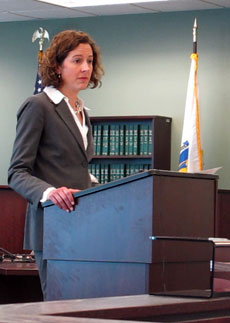 Assistant City Solicitor Elizabeth A. Lashway delivers closing arguments Monday. “Why are there no witnesses?” she asked the jury. “Surely if Ms. Law’s allegations were true, she would have at least one witness to her allegations of yelling on a daily basis?”

The jury – five white men and seven white women – found that the city did take adverse employment action against Law, but did not subject her to verbal or other harassment because of her national origin, and also that the city did not retaliate against her for her MCAD complaint. This jury finding was insufficient for Law to prevail on any of her claims.

City Manager Richard C. Rossi wrote in a press release, “I am pleased that the jury did not find discriminatory actions by city staff,” but said he was committed to a fair and equitable process for personnel disputes. The jury deadlocked on whether the city “constructively discharged” Law – that is, whether it forced her to resign through a pattern of intolerable work conditions. Lawyers for both sides will decide in the next month whether they wish to retry that part of the case.

The trial was dominated by the testimony of Law and the witnesses she called, but none other than Law herself testified to having seen or heard the hate speech directed at Law, or the alleged singing of a “hate song.” The jury had to weigh the words of Gloria Law against the words of her coworkers. While some emails were submitted to the jury as exhibits, none appeared to contain definitive evidence of Law’s harassment.

“She only presented witnesses who testified that when they had interactions with Ms. Law, many years ago, she was a competent, friendly and helpful person,” said Assistant City Solicitor Elizabeth A. Lashway, who defended the city.

“Ms. Law simply has not met her burden of proof,” Lashway said during closing arguments.

Attorney Michael Mason, who argued the case for Law, began his closing arguments saying, “If there’s one thing that’s become clear, it’s that Gloria Law did not have a safe place to work in the Cambridge Police Department. The people who should have protected her failed to protect her.” But Mason was unable to present clear evidence of discrimination against Law beyond the testimony of Law herself.

The all-white jury were selected from a pool of 60 people, only one of whom was black. Juries reflect the makeup of Middlesex County, rather than the demographics of Cambridge, which are much more diverse. The jury did not include anyone who had experienced or complained of discrimination in the workplace, according to jury questioning before the trial.

The city has lost or settled a half-dozen discrimination lawsuits for as much as $16 million in the past few years, and Law’s case is in a new crop of seven suits faced by the city. The next case expected to go to trial is Joanne Allison v. Cambridge, scheduled for September. Allison was a parking control officer for the city beginning in 1992 and alleges sexual harassment and retaliation.

An earlier version of this article indicated that the jury returned a mixed verdict. While the jury did return mixed findings of fact, the result is that Law did not prevail on any claims.