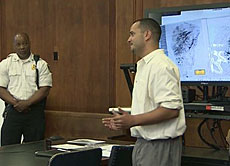 Marcos Colono was sentenced Thursday to up to 60 years in prison. He represented himself during his trial. (Photo: WCVB)

A serial rapist convicted of attacking two women during a 2008 Allston home invasion has been sentenced to up to 60 years in state prison, to begin only when he completes the lengthy term he is already serving on another double rape conviction, Suffolk County District Attorney Daniel F. Conley said Thursday.

Marcos Colono, 36, of Cambridge, was convicted June 25 on four counts of aggravated rape, two counts of assault with a dangerous weapon and single counts of home invasion and armed burglary.

Assistant District Attorney Holly Broadbent, chief of the DA’s Sexual Assault Unit, recommended life terms for the home invasion and armed burglary, terms of 60 to 70 years on the rape convictions and a term of two years for assault with a dangerous weapon.

Judge Janet Sanders sentenced Colono to two consecutive terms of 25 to 30 years to represent assaults on the two victims, a concurrent sentence of 20 to 25 years for the charges of home invasion and armed burglary and a sentence of two to three years on the two counts of assault with a dangerous weapon, which was deemed served during the four years Colono was held awaiting trial.

The sentences imposed Monday – totaling 50 to 60 years in prison – are to be served from and after the completion of the sentence Colono is serving on convictions out of Middlesex County.

In March 2013, Colono was found guilty in connection with a Cambridge home invasion and sentenced to up to 85 years in prison. The Aug. 26, 2010, home invasion on Pearl Street resulted in the stabbing of a 53-year-old Harvard researcher and his young son.

“This defendant will never walk a step or take a breath in freedom again,” Conley said. “He has the rest of his life to contemplate the vicious and cowardly nature of his crimes. This doesn’t undo the damage he caused his victims or their families, but I hope each of them can in time find some peace in knowing that their strength and courage led directly to this result. They have made our streets safer for others.”

Each of the victims appeared in court Monday and delivered statements describing how they have been affected by the crimes. Broadbent read each of them into the record.

“My lifestyle has changed,” one victim wrote. “I lost out on opportunities because I was too scared to move forward. Ultimately, Marcos Colono caused me to lose my career-driven motivation and altered my perception on intimacy for years to come. He destroyed everything, but I refuse to allow that to be the ending to my story. I have come this far, six years later, to put this terrible creature behind bars.”

“When someone is capable of hurting another person, they should not be able to have the freedom granted to the good people coexisting in this world,” Broadbent read from a statement written by the second victim, who returned to Boston a year after the assault to continue pursuing a college education put on hold after the attack. “I wanted to be an independent woman confident in my abilities to take on the world. Despite all of the difficulties, I continue to overcome this horrendous experience by carrying on life the best I can.”

Broadbent presented evidence and testimony during the trial to prove Colono gained access to the victims’ Commonwealth Avenue apartment on the night of Sept. 21, 2008, while wearing a mask and wielding a knife. Colono threatened them, assaulted them, bound them with extension cords and left the apartment with their identification cards and other property, the evidence proved.

Colono was identified as the assailant two years later, after DNA gathered at the scene of the 2010 Cambridge case matched DNA samples collected by Boston Police at the Brighton scene. Also at the Cambridge scene was a latent fingerprint that was matched to a print on file from 1998, when Colono was arrested on drug charges in Boston.