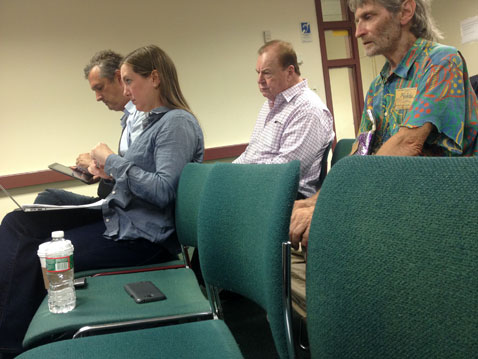 By Dian Zhang and Marc Levy

Don Holland, center, attends the Tuesday meeting of the License Commission at which he won seven weeks in which to sell the ManRay alcohol license. (Photo: Marc Levy)

The owner of the legendary, long-closed ManRay nightclub has all but given up hope of reopening after its eight-year absence, the License Commission was told Tuesday at a hearing about seizing the club’s unused liquor license.

Reflecting the surrender of owner Don Holland to the idea ManRay is dead, the license has been put up for sale, said James Rafferty, the attorney representing Holland.

It was listed last week for $225,000 with Atlantic Restaurant Group, also known as Atlantic License Brokers, and fliers and mailers were sent out advertising its availability, “but as of this evening, we have not received or obviously accepted an offer,” Rafferty said – although he had heard of one potential buyer offering significantly less than the asking price.

“We’re asking if the board would entertain an additional period of time to see if a buyer could be located … This is a final opportunity for Mr. Holland to recoup something,” Rafferty said. “People know he’s under the gun to sell it. August is a tough time to do this, but I suspect that he will find a buyer at a number less than the listed price if he were given a final 60 days.”

That would bring Holland back roughly to the late November deadline Rafferty asked for in the spring, when there still seemed potential to find a new home for the club.

Rafferty and Holland got about half that extension – about seven weeks ending Oct. 9, when the commission holds a decision hearing at which the ManRay license would be taken away.

But it was a victory at a meeting at which Holland could have lost everything immediately, considering chairwoman Andrea Spears Jackson opened discussion by reminding that “I’ve already made my position clear: I was the lone vote that voted to take revoke the license” at the previous ManRay hearing.

Rafferty and Holland walked a fine, dangerous line Tuesday with the commission, whose institutional patience with the nightclub’s life after death had long since expired and whose members seemed to simmer ever so slightly upon hearing the license had been listed only a week earlier. Rafferty acknowledged that “even in making this request it may appear that we’re not being respectful of the commission decision, but I want to assure you nothing could be further from the truth,” and commission members relented just as slightly upon hearing his rationale that a fast sale would cause a dramatically lowered price on a license for which Holland never stopped paying fees. Public comment also suggested that the additional time mattered little, while no one appeared to speak against Holland or a several-week extension.

ManRay opened at 21 Brookline St. in 1985 and stayed until July 2005, when its landlord opted to replace it with condos. Club owner Don Holland was intent on re-opening at another Central Square location, but failed to find one as years passed. Hopes reached a peak in January 2013 when Holland entered a tentative agreement for a former Blockbuster video store on Massachusetts Avenue, but commissioners were already chafing at delays and suspicious that the announcement was merely a delaying tactic, and their impatience grew when the agreement lapsed and the landlord began talks with a PetSmart.

Until March, Holland and Rafferty stressed his relocation efforts; in spring, Rafferty told commissioners the emphasis was tilting toward finding a buyer for the license.

Two members of the commission were missing for this hearing. Cambridge Fire Dept. Capt. Thomas Cahill sat in for the absent Chief Gerald Reardon, and Cambridge Police Dept. Superintendent Steven A. Williams sat in for Police Commissioner Robert C. Haas.

Jackson said one reason she hesitated to revoke the license Tuesday was to give Haas especially a chance to weigh in.

Two other Central Square nightclubs have been working through real estate and financing issues as well.

The Middle East: The Sater brothers, owners of the Middle East, are still trying to work out a plan to buy the club’s 472-480 Massachusetts Ave. home, where it’s been expanding since 1970. Longtime landlord Emile Dupont died in 2009, and his family hoped to sell the building. The Saters keep first rights to buy from the Dupont heirs for a little more than a year, according to Nabil Sater, with plans being to raise the needed $7 million by having developers build condos on top of the existing club while it stays open.

“The whole thing is very annoying, and there are too many policies involved,” Joseph Sater said in July. “But yes, we still try hard to buy the building out.”

Prospect Lounge: This club remains under construction at 47 Prospect St., Central Square, by the owners of the All Asia nightclub, which closed last year once at 334 Mass Ave. so the Massachusetts Institute of Technology could redevelop the block. The club concept and its call for premium audio and video equipment raised $3,483 last year in an Indiegogo campaign seeking $80,000, and a promotion selling membership started in July and ended Friday with 71 takers. Owner Marc Shulman said a date for a Prospect Lounge opening would be announced this week.