‘Tusk’: Kevin Smith changes things up, and his podcaster hero bears the brunt 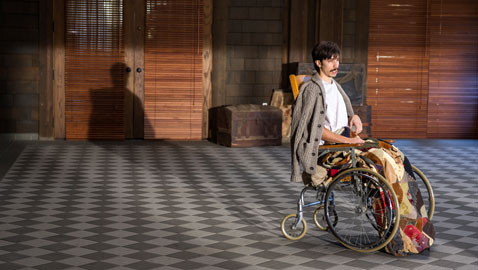 ‘Tusk’: Kevin Smith changes things up, and his podcaster hero bears the brunt

The latest from Kevin Smith signals something of a return to form and a bit of a surprise. After all, this was the man who felt so dejected from the film biz that he pretty much checked out after his mixed, “self-published” effort, “Red State” (2011) and retreated into various cultish, fan-adoring safe havens – podcasts and AMC’s tedious “Comic Book Men.” Of course Smith’s sloppy commercial outings preceding “Red State,” “Cop Out” and “Zack and Miri Make a Porno,” probably had something to do with it. That said, the one thing about Smith that’s been consistent beyond his mewling has been his snarky resilience – and that’s a good thing, because “Tusk,” despite being the WTF film event of the year, pays dividends for those with acquired tastes. 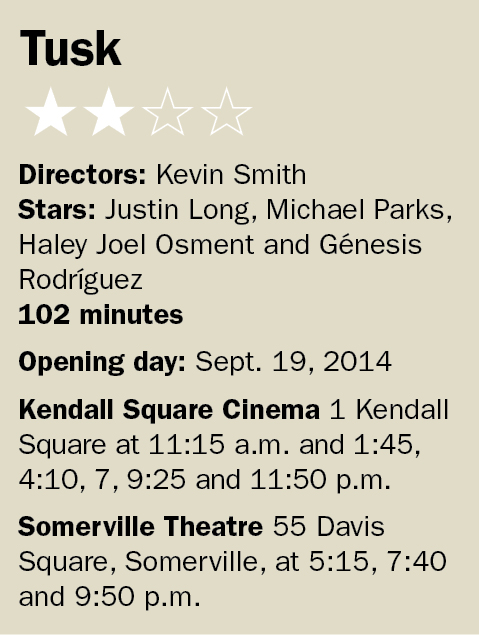 The film, a hefty slab of comedy atop a serial killer thread, alleges to be based on “actual events” – those being that Smith got his hands on a posting by a lonely older seafarer in Canada who was offering free room and board for anyone willing to hang out and wear a walrus suit for a few hours a day. On-air, that got spun into a plot brainstorming session that in turn launched the social media campaign, #WalrusYes. The response not only birthed “Tusk,” but, purportedly, a whole “True North” trilogy to go with – or offset – Smith’s breezy Jersey assemblage (”Clerks,” “Mallrats” and “Chasing Amy”).

Which brings us to Wallace (Apple pitchman Justin Long), an arrogant shit who co-hosts the wildly popular “Not-See Party” (Nazi, get it?) podcast essentially showcasing stupid human tricks. Wallace’s latest endeavor sends him off to the Great White North to interview the “Kill Bill Kid” (a Tarantino fan who accidentally took off his leg with a samurai sword), but things don’t quite work out. As a result, Wallace answers that “posting,” hoping the old coot has some outré tales to entertain. The eccentric recluse in question, Howard Howe (scene chewer Michael Parks) lives in a stately manse in the middle of nowhere and is confined to a wheelchair, but after one cup of “delicious” tea, it’s Wallace who finds himself in the wheelchair.

It’s here that we depart from most anything that’s ever been affiliated with Kevin Smith and move dangerously close to “Human Centipede” and “Boxing Helena” territory. Beyond saying “surgical metamorphosis,” I won’t say any more of Wallace’s ordeal – other than, even for being such a raging asshole, he does in fact earn our sympathies by the end, a real tribute to Smith and Long. Thankfully, Smith does what Kevin Smith does, which is some funny situational goofball stuff that’s provides light amid the darkness, such as a flashback to Wallace receiving a send-off blow job from his girlfriend (Génesis Rodríguez) that never quite has a happy ending (think of snowballing in “Clerks”) or Wallace’s proud ignorance about the significance of hockey in Canada when talking to a customs officer. Add layers to the pat, macabre plot are such details as Haley Joel Osment (now filled out and frat boy-esque) as Wallace’s co-host, who more than watches over Wallace’s girl while he’s away. The biggest change-up that flies in from left field (and at this point in the media spin, not a giveaway) is Johnny Depp as Guy Lapointe, an alcoholic ex-homicide detective haunted by the specter of Howe’s string of victims. The performance is more Canadian “Columbo” or Inspector Clouseau than Brad Pitt in “Se7en” – and it appears that Lapointe will be back in Smith’s next “True North” installment, “Yoga Hosers.”

All these pieces – Long’s wide performance, Smith’s deft little ditties and Depp’s delirious cameo – work seamlessly in their own right, but when sewn together don’t quite mesh without garish clash and ugly staples. It’s as if Smith made two movies with some of the same crossover characters and created a third film in the editing room.The anchor through it all is Parks, taking a slice-thin role and turning it into a fully seasoned hock. There’s no hesitation in his descent into the the weird. He submerges and becomes. The other great asset in “Tusk” is the fantastic special effects and makeup by longtime movie vet Robert Kurtzman.

“Tusk” may reside far from Smith’s mall and convenience store, but it does occupy the land of irreverent snark that should make Smith aficionados sing, or at least bark like a tooth-walking seahorse.