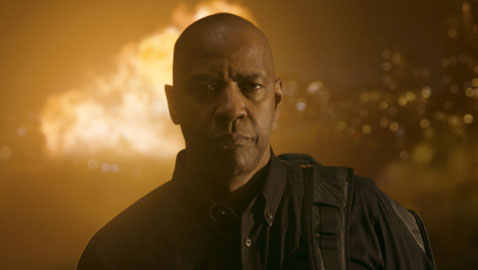 Here’s a zany idea: Take a moderately successful 1980s TV crime drama staring a British actor (Edward Woodward. the compelling condemned lieutenant in “Breaker Morant”) as a retired “C.I.A.” agent living in New York City who “fixes” peoples’ problems, drop in Denzel Washington and transpose the setting to Boston. Pretty weak tea that without Washington might be something a skipping a theatrical release and heading for the vast realm of VOD obscurity. Still, even with, is a payoff possible? 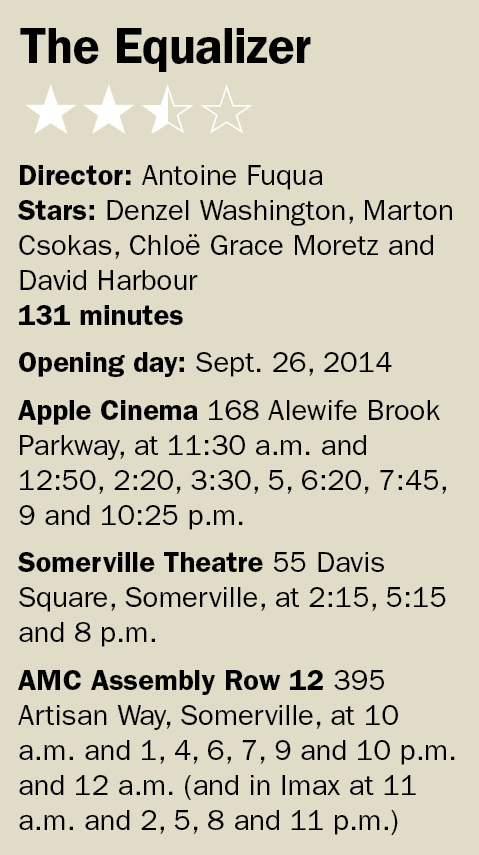 The good news is that moody stylist Antoine Fuqua has the helm for “The Equalizer.” He and Washington blew audiences’ minds back in 2001 with the bad-cop fable “Training Day.” There, the synergy of their collaboration shone through brightly; here, it goes a long way too. The bad news, or not so good, is that the script’s penned by Richard Wenk, a guy whose jam is doing “Expendables” films and “The Mechanic” remake. It’s within his milieu, sure, but those testosterone-infused retreats were never going to make the Screenwriters Guild take pause during awards season.

The film begins with a slow, ponderous buildup. Our man of intrigue, Robert McCall (Washington) appears a restful, avuncular sort, toiling away at a Home Depot (rebranded Home Mart) where his easy manner makes him everybody’s BFF. But at home he’s a bit OCD, everything’s extra neat and in place and his routines are run by stopwatch timing. He also doesn’t sleep much, so he hits an all-night diner where he reads his way through the 100 greatest novels (in an odd surreality, he brings his own tea and cake and never orders). It’s there that he meets Teri (Chloë Grace Moretz), a young streetwalker waiting for johns. The whole set-up – the diner, McCall’s observations and Moretz’s post-pubescent sexuality – shout “Taxi Driver” into the dark slicked night.

But McCall is no Bickle. He’s got skills and a plan. After Teri gets beaten to a pulp for giving it back to an abusive trick, Robert pays her Russian pimps a visit in the swank eatery they run their operation out of. It’s in the back room that much scene chewing goes on between the unassuming Robert and five heavily armed strongmen. When the talking stops, only Robert walks out. It’s here that Moretz pretty much exits the film (she’s still laid up in the hospital) and we realize that Robert is very skilled at killing. But the Russians aren’t done. They’ve got the cops in their back pocket and the pissed-off capo over in the motherland sends his very best over to Boston to exact revenge. The imported muscles who goes by the cuddly, non-Russian name of Teddy (played with aplomb by Marton Csokas, who looks like Kevin Spacey in a bout of ’roid rage) has no patience for non-answers and is aptly described by one knowing participant as “a sociopath with a business card.”

In short, Teddy’s an admirable adversary for Robert, but while Teddy gets his A-game together, Robert dithers about with other miscellaneous good deeds, such as helping a corpulent co-worker (Johnny Skourtis) get in shape for his security guard exam and shaking down the cops shaking down local mom and pop shops. Pretty pat stuff, but Fuqua and cameraman Mauro Fiore (“Avatar” and “Training Day”) make Boston hum with gritty darkness and foreboding, capturing not only the rampant criminal past of the city and also the current sweeping gentrification. The plot, however, is redacted to dossier-thin and reduces Robert ultimately to little more than a superhero sans a costume. Nice additions come in the form of Melissa Leo and Bill Pullman as Robert’s former handlers for the vague, unnamed government agency and the spatial use of Home Depot during the grimly brutal finale – anything “MacGyver” or the TV “Equalizer” ever did is sheer Disney by comparison. It’s so messy, you can almost hear the PA intone “clean-up needed on aisle 5, 6, 7, 8, 9 and 10.”

“The Equalizer” never finds any sense of flow, but in parts it can be thrilling, even rapturously macabre. Moretz seems to be occupying shoes that are still too big for her, but she’s also relegated to a role that’s strictly garnish. This is Washington’s movie, and he owns it whether he’s running cliché right or thespian left, finding just enough daylight to make us care.