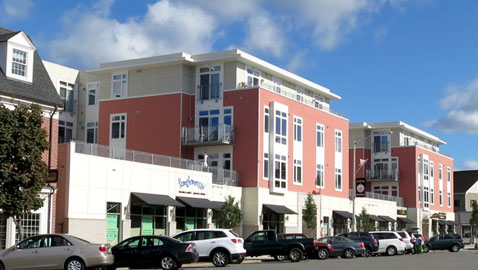 From Oaktree Development, Oct. 28: Cambridge’s Oaktree Development was honored last week as a finalist for the Jack Kemp Excellence in Affordable and Workforce Housing Award by the Urban Land Institute for its development of 30 Haven in Reading. The 53-unit, mixed-income urban infill project was built using an modular construction model developed by the firm.

The award is given annually to workforce housing developments that represent outstanding achievements in affordability, building technologies, quality of design, involvement of public-private partnerships, mass-transit orientation and replicability of the development.

The 30 Haven development was selected by the ULI Terwilliger Center’s national advisory board, primarily for the innovative modular design and construction methods that enabled Oaktree and its partners to create affordable housing without the use of a public subsidy. The Center focuses on developing ways to leverage private sector investment to create affordable and workforce housing. The development was built using modular construction combined with the patented GreenStaxx system developed by Oaktree founder Arthur Klipfel, described as allowing developers to build high-quality, cost effective and green structures in compressed time frames. The development was also recognized as an example of 40-R Smart Growth principles, given the development’s strategic proximity to the MBTA commuter rail. Built to LEED and Energy Star standards, the four-story development combines 22,000 square feet of retail space with 53 one-and-two bedroom apartment units. Eleven of the units are designated as affordable and 18 are workforce housing, with the remainder of the units commanding higher market rate rents.

The award was presented during the general session at the ULI Fall Meeting in New York City on Oct. 23. “This award supports Oaktree’s longstanding mission of producing housing that is both affordable and sustainable, and for that reason it is very much appreciated,” Klipfel said. “For over 35 years our focus has been creating mixed-use urban multifamily housing configured near public transportation, and to be recognized with the Jack Kemp Award is indeed an honor.”

Oaktree was founded in 1969 as Unihab and specializes in transit-oriented, mixed-use development.