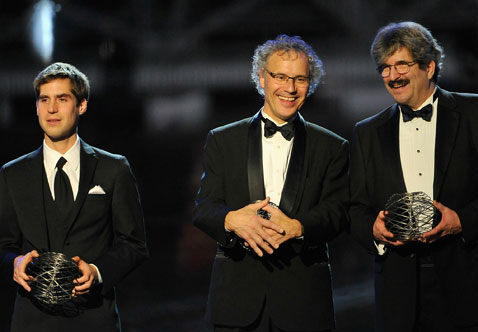 The winners each get a $3 million prize and were honored at a Sunday ceremony in California.

Ruvkun and partner Victor Ambros were honored for the discovery of a new world of genetic regulation by microRNAs, a class of tiny RNA molecules that inhibit translation or destabilize complementary mRNA targets. Also honored in the 2015 Breakthrough Prizes in Life Sciences were C. David Allis, Alim Louis Benabid, Jennifer A. Doudna and Emmanuelle Charpentier.

Jacob Lurie was honored for his work on the foundations of higher category theory and derived algebraic geometry; for the classification of fully extended topological quantum field theories; and for providing a moduli-theoretic interpretation of elliptic cohomology. Also winning in the 2015 Breakthrough Prize in Fundamental Physics was Saul Perlmutter, Brian P. Schmidt and Adam Riess, leading a collaboration of 51 total prize recipients splitting $3 million.

The foundation awarded $36 million in total.

“This year’s life sciences laureates have made some spectacular discoveries, from a new kind of gene to a Parkinson’s treatment that has improved the lives of many,” said Anne Wojcicki, a co-founder of the awards. “It’s energizing to be in the company of such brilliant and fertile minds.”

“The world faces many fundamental challenges today, and there are many amazing scientists, researchers and engineers helping us solve them,” Zuckerberg said. “This year’s Breakthrough Prize winners have made discoveries that will help cure disease and move the world forward. They deserve to be recognized as heroes.”

The ceremony will be simulcast in the United States on Discovery Channel and Science Channel at 6 p.m. Saturday, then televised globally the weekend of Nov. 22 on BBC World News.

“Most of our time is spent on mundane matters,” Milner said. “Tonight we thought about the molecules of life, the structure of prime numbers and the fate of the universe. It was an uplifting occasion for everyone.”

“The remarkable scientists we honor refuse to accept ‘conventional wisdom’ as we know it,” Ma said. “They question everything. They venture into new worlds.”

The Breakthrough Prize Symposia took place the day after the ceremony at Stanford University and was co-sponsored by the University of California at Berkeley and the University of California at San Francisco. In addition to the agenda featuring talks from leading scientists and Breakthrough Prize winners, seven more awards were handed out by the foundation in a category for junior researchers in physics, the $100,000 New Horizons in Physics Prize.