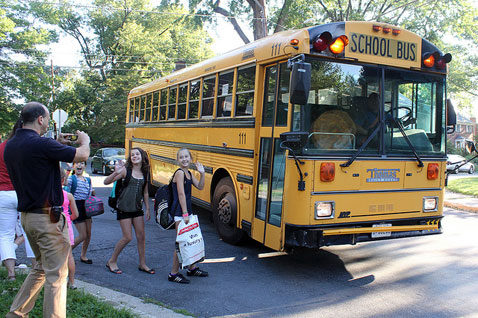 The school department is rolling out a transportation system that will eventually allow parents to see where their child’s bus is, and even if their child is on it.

At Tuesday night’s meeting, the School Committee approved a $121,000 three-year contract for a system that provides mapping, routing and scheduling of buses, as well as a secure portal for parents to track their children. The system will be tested this spring at one school – yet to be determined – and start a rollout to the entire district in fall.

“We have probably one of the most open and inclusive transportation practices of any district,” said school department Chief Operating Officer James Maloney. “We let kids get on [a bus] any given day to go visit a friend, or maybe find different stops at the end of the day for day care one day, community schools another day and grandmother a third day.”

The key, Maloney said, was to find an on-board tracking system that worked without delaying boarding. He noted that the technology has advanced considerably and smartphone technology has become a mainstream job requirement, so he’s convinced the staff will be up to implementing the program. “We are going to roll it out very slowly,” Maloney stressed. “There’s a lot of training involved [for] drivers, monitors, principals, assistant principals, people at the school who do bus duty.”

The parent portal component will be added eventually. “It will allow parents to know where their bus is at any given time and also will be able to have an ID number to see if their child got off the bus safely at some point or was still on the bus,” Maloney said. “I think it’s really neat.”

Committee members were enthusiastic. “I think this is a perfect example of how technology can help a school district move forward, how it can allay some of the fears that people have around transportation and their children,” member Richard Harding said.

Separately, the committee was unanimous in approving a policy change allowing students to be driven by parents, instead of taken by bus, to some athletic and extracurricular activities – but not to field trips. Based on a discussion at the Oct. 21 committee meeting, the policy was rewritten to allow flexibility when chartering a school bus for a handful of students is impractical. The committee passed a second revision simplifying legal language and driver liability requirements.

The meeting included a budget subcommittee hearing for public comment on budget priorities – the second this fall, with both coming earlier in the budget process than in recent history. Committee members, including budget subcommittee co-chairmen Harding and Mervan Osborne, have said repeatedly that they want to encourage input from parents and staff while the committee is still developing its budget guidelines.

The public comment included a plea for more King Open support. Parent Abby Fechtman requested “adequate staff support” for fifth-graders at the school, a cohort she called extraordinarily challenged. Echoing comments by another parent at the Oct. 21 budget hearing, Fechtman presented an analysis that 70 percent of the school’s fifth-graders are considered by the state’s education department as “high needs.” “In a classroom of only 17 students,” she said, “only five will not be in a high-needs category … and only six are girls.”

In fact, Fechtman said, data show the school “has one of the highest percentages of students with disabilities of any [district] JK-5 school, one of the largest number of low-income students and is disproportionately boys at several grade levels. We are also, according to the census, located in the poorest neighborhood of Cambridge.”

Fechtman urged more resources for schools with greater demographic needs, touching several issues raised recently in discussions about Cambridge’s Level 3 schools and the city’s achievement gaps. (A Level 3 rank means at least some population subgroups had MCAS standardized test scores in the bottom 20 percent of the state.) She quoted Chief Financial Officer Claire Spinner’s comments at a Sept. 30 roundtable discussion on a state report on the district: “What is equity? Is it giving the same thing to every school? Or targeting more resources to schools that have demonstrated higher need? … We have to come to agreement with putting more resources in higher-need schools.”

Fechtman also pointed to member Fred Fantini’s roundtable comments about Level 3 schools: “What hurts the most in this report is that our Level 3 schools have lots of students with disabilities, low-income kids, kids of color. When structures and systems don’t work efficiently, they are the kids who lose out … Those are the kids who take the hit. If we need to commit significant budget resources to those areas, these kids can’t be left behind anymore. It has to end now and end today.”

“This fifth-grade cohort at our Level 3 school is an excellent example of how we can apply some of this differentiated support,” Fechtman said.

Other budget hearing public comments. Parent Pia Cisternino, from the Cambridge Parent Advisory Council on Special Education, urged the school department to rely on “evidenced-based methods” for supporting students, “including special education students.” She called for three specific programs used in some schools to be used districtwide and for all students.

Parent Nadia Shallaby called for spending to keep and support advanced learners, saying she was aware of several eighth-grade students last year being offered scholarships to private schools. Parent Matthew Allston urged greater funding for Beyond the 4th Wall drama group, pointing to the organization’s record of integrating children from various income groups in grades 3 through 8 into empowering performances.

Kennedy-Longfellow parent Doug Tuttle reported on what he felt were the benefits of the school’s technology program for his third-grader with a “language-based disorder.” Since transferring to the school he has seen his child respond excitedly to iPad-based storybooks and learning on math and creative speaking. “These are of course all things that can be done without technology,” Tuttle said, “but for someone with special needs the advantages of being able to get excited about the immediate positive enforcements of doing math problems rights … or being able to write his own story from his own voice so that the connection between the brain and the hand no longer hinders his creation are joyous, breathtaking and astounding.”

Molly O’Brian, parent of a fourth-grader, urged attention to buildings, including to bathrooms and climate control; more School Improvement Funds; and more investment in reading and math interventions through the third grade. She urged the committee to ask the city manager for a “greater piece of the pie” to enlarge the school budget.

These parents joined 14 parents who spoke at the Oct. 21 hearing, when comments emphasized spending less money on outside consultants in favor of more in-classroom staff and student supports, particularly in the early grades. Several parents also requested that the school department ask for more funds from the city, citing data they say shows the portion of the city’s budget going to schools has not grown as much as other service-based departments, and the fact that about 95 percent of the school budget is “already spent” in year-to-year expenses with relatively little discretionary funds available for initiatives without finding deep program cuts.

Except where noted, all motions were passed unanimously by the committee.

Student behavior and school climate: Member Kathleen Kelly sought by February a “comprehensive analysis of the roles, responsibilities and caseloads” of school staff who provide student support, such as counselors, psychologists and other personnel. Kelly said her goal was a deeper understanding of what works in each school community in terms of classroom management and school climate, although the report would also help inform budget negotiations. She worked with Deputy Superintendent Carolyn Turk and Assistant Superintendent for Student Services Victoria Greer in crafting the information request.

Awaiting reports. At the Dec. 2 meeting the committee will hear from Academic Challenge and Enrichment Manager Paula Feynman, who will elaborate on her summer presentation with a progress report on her work with advanced learners. Parent members from advocacy group Cambridge Advanced Learning Association will also provide input. A report requested in June 2013 for an overview report on advanced placement classes at Cambridge Rindge and Latin high school is “still a work in progress,” Superintendent Jeffrey Young reported.

Other contracts. The committee passed a contract for temporary clerical services with a lower award amount. The original proposal was for up to $90,000 for the year to cover temporary vacancies, based on the maximum requested in the previous few years. Spinner said she was able to bring it to $50,000 after a closer examination of likely positions and requests for leaves of absence.

Also passed were $1.2 million in contracts for out-of-district placements for special-education students required by law when public schools cannot meet a child’s needs. Committee member Patty Nolan praised Greer for her work in reorganizing the Student Services department in this, her second year in the job. “This is the first time in my memory and probably in [long-time member] Mr. Fantini’s memory that this early in the year we have this complete a record of out-of-district placements, and I know it’s a testament to your staff … and your leadership.” Along with the more transparent budget process under Spinner, Nolan said, “it’s a just real sign of tremendous progress in this district that ultimately helps all of the kids.”

The committee approved contracts for nursing, student mental health assessment and services, other special-education services and computer software support services, as well as passing a revision to a previous contract for the Early Childhood Task Force working with the city; the revision includes expanding the school department’s role in aligning school curriculum with community-based partner organizations.

Grants and gifts. Calendared by member Fran Cronin until there is more information about how funds can be used was a federal Title III grant of $81,000 to support English-language learning for students with limited English (a $2,000 grant from the Big Yellow Bus for field trips on that same recommendation was also necessarily calendared). Passed unanimously was the receipt of two small gifts to Graham & Parks and CRLS.