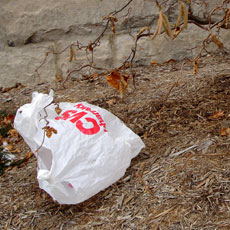 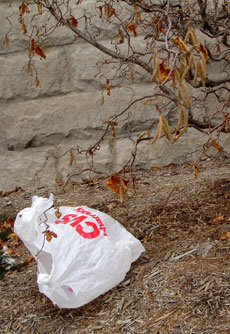 A plastic bag ordinance could help solve an environmental problem, but the city has been slow to act. (Photo: Kevin)

The city has been looking for seven years and seven months at ways to reduce use of plastic bags, with three ordinances coming before the City Council and the third, to be heard tonight, considered worse than the previous one by the Massachusetts Sierra Club.

The previous version, introduced by then-councillor Marjorie Decker, now a state representative, was a “well-written ordinance … carefully researched and finalized by the city’s administration,” says a Sierra Club post urging residents to support it as it is brought forward for a vote tonight by councillor Dennis Carlone.

The new, competing version, meanwhile, is “could likely be the weakest plastic bags ban in the United States,” the Sierra Club says.

Decker’s law “is now before us after years of study and public discussion,” Carlone said in a Thursday letter announcing he would be calling for a vote and for the city to “be a leader in the effort to change the ‘single-use, throwaway culture’ that contributes to the problem of global climate change.”

How does this issue keep getting recycled?

The leadership in the effort began with an April 30, 2007, policy order from a council that included Decker, three members still on the council – Craig Kelley, E. Denise Simmons and Tim Toomey – and Brian Murphy, who is now assistant city manager for community development. The effort saw not just changes in council membership, but in the city manager overseeing the request, as Robert W. Healy retired after 32 years in office and was replaced by his deputy, Richard C. Rossi.

Decker introduced her Plastic Bag Reduction Ordinance on July 29, 2013, after previous attempts by her in 2011 and one-term councillor Minka vanBeuzekom in 2012, and the council moved it back to its Ordinance Committee because it arrived months after an election that saw Decker depart for the state legislature and four new members arrive. Mayor David Maher – formerly chairman of the committee – said Feb. 10 that he wanted newly elected councillors to have the chance to discuss the proposal. Those four councillors attended April 17 and, on a motion by Marc McGovern, there was a vote to send the order to the full council for a second reading with a favorable recommendation.

Councillor Leland Cheung had stopped by the meeting briefly to make a motion to keep the ordinance in committee (although it had been before the full council since Feb. 24 as “unfinished business”) and have the city investigate different fees, rules on bag thickness,  treatment of paper bags, a longer timeframe for implementation and whether to add compostable bags – controversial because their ability to compost is questioned – to the rules. According to meeting minutes no action was taken on the motion.

The city’s unexpected response was ready five months later, on Oct. 27, and is scheduled to be in front of the Ordinance Committee at its Feb. 4 meeting, City Clerk Donna Lopez said. It is back with the council tonight, though, making its second appearance in a two-month period, because Rossi has attached related regulations about which bags will be affected and what charges businesses will face when they use certain plastic bags.

Carlone was alarmed to see the new version.

“This bill is a cause for concern because it relaxes the definition of reusable bags in a way that would allow for thinner plastic bags to be considered ‘reusable’ and it also moves important provisions out of the ordinance itself,” Carlone said. That means decisions on enforcement would be made by the commissioner of Public Works rather than by law. He continued:

Worst of all, from a perspective of legislative process, the alternate bill would require a new round of Ordinance Committee hearings. So after many years of careful study and debate, the city might take a strong bill that is 99 percent of the way to becoming law and instead restart the ordinance process with a new bill that the Sierra Club feels is substantially weaker.

The mayor has made it clear he’s no fan of the bag ordinance. In debate in October, he described problems that could arise from having fewer plastic bags on hand and having people pay to use one. “You have very expensive stationery stores in situations where, on a rainy day, if someone is putting an expensive product into a paper bag, it’s going to get ruined,” Maher said.

He also disliked the idea of having different rules than Brookline has in its existing bag ordinance, or of “350 odd cities and towns in Massachusetts” having different ordinances and wanted a regional or statewide answer instead.

“This was problematic in the last term and it’s problematic now, and I’m not certain I see all the issues worked out yet,” he said. “I surely am pleased to see efforts made to clean up the environment, [but] ideally we would not be doing this.”

Fortunately, Maher said, “We’ll have plenty of time to talk about it.”

That puts the mayor’s comments in late October at odds with the sentiment at last week’s council meeting, where elected officials talked about languishing design and development issues in Central Square and the broader issue of how, as councillor Nadeem Mazen put it, “things can disappear into limbo.”

Lack of adequate staff in the Community Development Department run by Murphy has been raised a couple of times in the past year, and Rossi answered councillors’ concerns last week with a similar explanation: They are overloading city planners with requests.

“We’re like a restaurant that has a menu, and all of you keep adding new dishes to the menu – big time, you know? Ones that are tough to put together. That’s why these timelines” go so slowly, Rossi said, continuing:

That’s because there are a lot of tasks added to this group of departments that are working very hard every day. And I think we try to balance that as best we can every day. I am not complaining. People work hard, they love their work and they enjoy their work. I’m just trying to talk about reality. The reality is, yeah, there aren’t clear timelines because what was yesterday’s priority is now in third or fourth or fifth place. Because something that’s more hot has come up and needs people to work on those things.

Next story: Despite readiness to pass plastic bag bill, ‘amendments’ will get February hearing