Despite readiness to pass plastic bag bill, ‘amendments’ will get February hearing 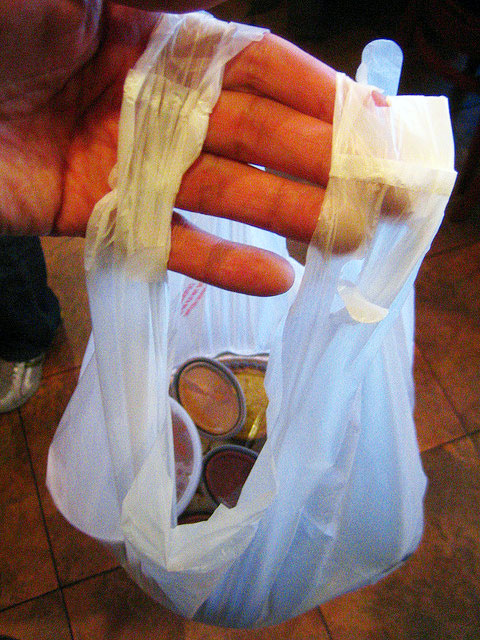 Despite readiness to pass plastic bag bill, ‘amendments’ will get February hearing

Several city councillors were ready to act Monday on a plastic bag ordinance, saying nearly eight years of debate was long enough, but instead the rules will go to “one more” subcommittee hearing in February, after which it may go back to the full council for a final vote.

“It needs one more full public hearing,” councillor Tim Toomey said, responding to a call by vice mayor Dennis Benzan after discussion of a set of amendments proposed by city staff to plastic-bag rules.

While that approach carried, there were others who wanted to resolve the amendments that night, with councillor Nadeem Mazen suggesting the councillors take a half-hour to talk about the amendments and pass the rules despite the meeting being already four hours into what wound up being a five-hour, 40-minute total.

Fellow councillor Dennis Carlone had signaled Sunday that he planned to call for a vote on a plastic bag law, alarmed that despite progress on a bill endorsed by the Massachusetts Sierra Club, Green Cambridge and others, “a new, alternate bill also appears on tomorrow’s agenda” that would restart the calendar and add months or potentially years to a process that began in April 2007.

That city staff were offering amendments at all was something of a surprise. While the council had been debating a “Plastic Bag Reduction Ordinance” recently referred to as the “Decker bill” because it had been introduced in a previous council term by then-member and now state Rep. Marjorie Decker, the city manager’s office submitted to councillors Oct. 27 what it called a “revised ordinance titled ‘Checkout Bag Ordinance.’”

Despite the different name and label as a “revised ordinance,” Assistant City Manager Lisa Peterson said it was really just a package of proposed amendments to the existing ordinance. (She potentially adding to the misunderstanding by referring to the Oct. 27 package as “the third ordinance” she’d submitted to the council on the matter. In addition, when it was introduced in October, Public Works Commissioner Owen O’Riordan called it a “new ordinance.”)

“These are all amendments. The ordinance submitted Oct. 27 was an amendment, so they’re not competing ordinances,” Peterson said. “But there are a number of options that are now before the council.”

Added to the debate over plastic bags was a program expected to go citywide in a few years – a program being tested by 800 households in North Cambridge – in which food waste in compostable “biobags” is picked up separately from trash. There are questions about what weight of plastic bags will be allowed and whether allowed weights will be determined in the law or adjusted as needed by the city’s commissioner of Public Works. An education and outreach period is extended to a year of rollout from six months, and exempt businesses and uses may yet face debate.

Councillor E. Denise Simmons added two amendments of her own to be voted: that church events be exempt from rules restricting the use of plastic bags; and there there be a commission or committee in place for the rollout so businesses have a way to complain or appeal as restrictions hit them.

Peterson said the new “Checkout Bag Ordinance” set of amendments was written in response to questions asked by councillors at an Ordinance Committee hearing led by Benzan on April 17, and the vice mayor said his original suggestion had been to keep the matter in committee until those answers came – although he was also one of four, unanimous votes that day sending the “Plastic Bag Reduction Ordinance” to the full committee with a favorable recommendation.

While asking that the amendments go back to being in the form of a list rather than “in the form of an ordinance,” Carlone said he would accept an early February hearing on that list but “would definitely still be prepared to vote on the ‘Reduction Ordinance’ tonight, with amendments if necessary.”

Mazen was aboard, and so was Marc McGovern, who noted that with environmental issues low on a list of resident concerns in a biannual citizen telephone survey, “I would prefer to do this as soon as possible so we can focus on other things.” Craig Kelley also supported an immediate vote, saying:

I don’t know that waiting until February is something we really want to do. We’ve been waiting since April … I do agree we have sat on this longer than we should have … Realizing this, like any ordinance, is something we can tweak down the line. But certainly we can’t tweak it if we can’t pass it in the first place.

After hearing several pleas to resolve the issue then, Benzan instead voted to refer it back to the Ordinance Committee. On a voice vote, rather than councillor-by-councillor roll call vote, it passed and will be scheduled for a meeting in the new year.