‘Interview’ is a weak blow for democracy, says some funny things about business 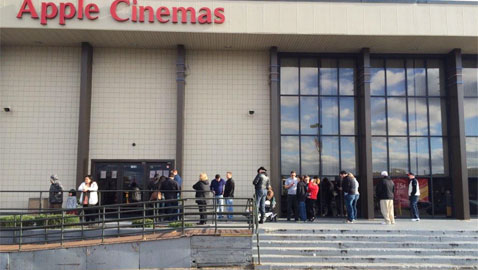 ‘Interview’ is a weak blow for democracy, says some funny things about business

Line starting form in front of Apple Cinemas in advance of first showing of The Interview. #7News pic.twitter.com/wOUfniPlYT

Well, so “The Interview” happened, and as a result (of the big guys stepping out) 300 or so indie and small-chain theaters will now make all the bling off that notorious Sony thing – a dirty bomb since the day it was greenlit by the studio. Yeah sure, there was the hack and the threat, but “The Interview,” which had gonzo aspirations of “Borat” and “Team America: World Police,” didn’t break new ground so much as it breaking wind amid some very strong political swirls.

For those not up to speed, the now-infamous hack of Sony – allegedly by North Korea because it did not want a film depicting the assassination of Supreme Leader Kim Jong-un to make the rounds – put the studio on edge, beyond the Tinseltown fallout of condescending, cringeworthy emails revealed to the public in which studio execs let loose their inner thoughts on pop icons such as Adam Sandler and Angelina Jolie (“talentless”). What to do? The film was a turkey, and the liability for movie hall violence would be astronomical. That and maybe a moral dose of “let’s not get anyone killed over our movie,” so Sony let big theater chains AMC and Regal back out if they wished. For that liability reason and (hopefully) public safety reason, they did.

In the aftermath of such a decision came cries of capitulation and giving in to terrorists. George Clooney and the POTUS chimed in. “The Interview” had become an emblem of freedom of speech, an absurd spectacle if ever there was one. As the Christmas Day opening date drew nigh, smaller theaters around the country – such as Apple Cinemas in Fresh Pond, taking heed that the perceived threat by the so-called Guardians of Peace was not bona fide – lined up to exhibit. Sony decided to do a simultaneous On Demand release, something the big chains such as AMC and Regal consider infidelity and won’t do, as they rely on exclusive or near-exclusive exhibition rights in their business model. A similar phenomenon happened here this year when The Weinstein Co. decided that Joon-ho Bong’s “Snowpiercer” was too long and not edited in a fashion the higher-up (Harvey Weinstein) deemed good for business, so they kicked the Korean cult master’s movie down the ladder and into the Video On Demand market. Several astute independent theaters such as The Brattle saw this as an opportunity and pounced. For one week The Brattle had a string of sellouts; the film was one of its all-time best earners at the ticket office. The film also made it onto many critics’ top 10 lists.

I did go see “The Interview” Christmas Day at Apple Cinemas. The theater was in a froth, news crews from every station were there, all the shows sold out and those attending were more diverse than just about any I had been to in the past five or six years. Part of that had to be the curiosity factor. Some people just love sophomoric mush laced with a heavy dose of scatological yucks, and then there was that whole patriotic freedom-of-speech thing, which is just misguided and the wrong mantel to hang your national pride on. But people were there beaming it proud to the comely reporters from channels 5, 4 and 7.

The sentiment is that people are taking a “chance” going to a screening of a film that terrorists said “see and die” is defiance for a way of life – the right to exercise free will and not knuckle under to terrorism. That’s what we did in the wake of 9/11, and that’s what we’re doing here. The movie itself? Not much to say; occasionally funny, the acting and the script are tepid (the best performance is by Randall Park as Kim Jung-un) and there are many missed opportunities and gaps. Those gaps being that they never show any of the impoverished and the oppressed, and Kim goes from being the misunderstood man-boy buddy of Dave Skylark (James Franco as the smug, idiotic, self-loving interviewer) to bloodthirsty tyrant – a transition that materializes out of thin air even though his (and North Korea’s) long list of human rights violations is well documented. Then (spoiler alert) after Kim is finally dispatched, the movie ends on an airy note of hope that the people of North Korea move forward, possibly in a democratic fashion. But is there any talk of nation building anywhere, even when the CIA enlists Skylark and his producer (Seth Rogen, who co-wrote and co-directed this over-fermented mung)? Nope, not one whiff of kimchi democracy is anywhere, but there are plenty of jokes about how the Supreme Leader does not shit or piss and is therefore a deity.

And finally, the mock assassination of a living leader who’s the head of a country at odds with the country where you’re making the movie – not the greatest idea, unless it has power and bite coupled with a sensitive hand to endear while cutting with ridicule. Rogen and his directorial collaborator Evan Goldberg take this to mean bland, beer-can thuggery, which intoxicates and kills all cerebral provocation, and political undertones are proverbially flushed down with the shit jokes. Perhaps a consult with Dennis Rodman could have added the right dash of cred and color?

Rogen and Goldberg could have learned a thing or two from the great Charlie Chaplin. No one went after a worldwide SOB with greater comedic panache and nuance than Chaplin did when he took a swing at Hitler in 1940 with “The Great Dictator.” Chaplin was a man skilled in comedy, who knew politics, the place of artist’s voice and its power to affect.

Granted, the Nazi demon was not called out by name and there was no assassination, but it was dead-on, rapier sharp and handled with kid gloves. “The Interview,” conversely, is little more than a sloppy air kiss blown lazily under the banner of “free speech.” If it represents that, let’s hope liberty remains stifled.

No matter. Apple Cinemas is making good cake of this and rightfully proving two things: sometimes even an inanity dressed up as righteous radical skewing can be good for business; and there’s really no such thing as bad publicity when it comes to the movies.