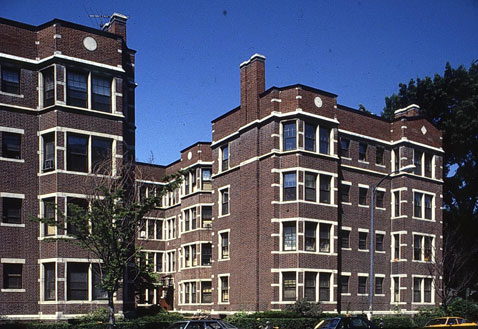 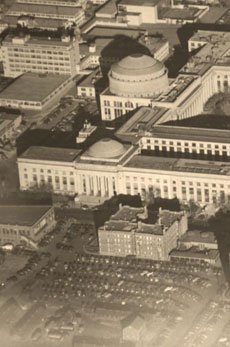 Bexley Hall, bottom right, seen circa 1935, is across from the institute’s main entrance at 77 Massachusetts Ave. (Photo: Cambridge Historical Commission)

The Massachusetts Institute of Technology got the go-ahead Thursday to demolish one of its undergraduate dormitories, the 104-year-old Bexley Hall, after telling the Cambridge Historical Commission that “the building is falling apart” and that it “couldn’t come up with a real plan that worked for repairing the building.” MIT shuttered Bexley in an emergency closure in spring 2013, displacing 116 undergraduates.

The institute’s problems with Bexley were made dramatically worse by its own attempted remedies. “Much of it we caused” by installing flashing along the top of the building meant to prevent rusting of the parapet, said Thayer Donham, a planner at MIT. “We thought if they encased that edge in something, no more water would get in. But unfortunately they delivered the water down into the wall below, which caused the mortar to fall apart.”

It “had the effect of funneling water into the brick,” said Charles Sullivan, the executive director of the commission.

The institute discovered the problems in April 2013, when a visual inspection showed there had been “significant deterioration” compared with two years before. So MIT hired structural engineers to evaluate the building, Donham said. The engineers found “the façade was in much worse shape than anyone expected,” she said.

Donham said the wood structure of the building had separated from the masonry wall, and “the wall was starting to bow out, and the structure was starting to wobble.” The slabs in the basement had started to shift, Donham said, contributing to structural damage.

“Daylight through the façade says it all,” said a consultants’ report on the building, showing sunlight coming into the building through holes between bricks in this image from the report: 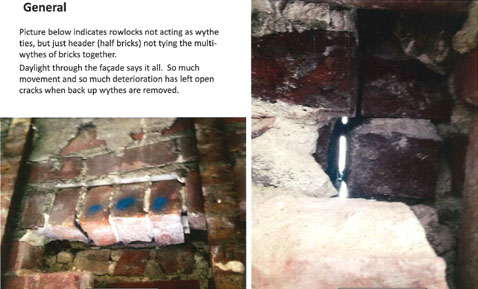 “We’re quite disappointed to be here, really,” Donham said. “It’s in a very prominent location at our front door. It matters at lot to MIT what happens there.”

“I think that MIT really fell down,” Sullivan said. “They’ve stood up and admitted that they neglected [the building], no question about it. There are many buildings of a similar age that are in sound condition, we hope, that haven’t gotten to this point. “

The commission voted to find Bexley Hall a significant structure, but then voted that it be “not preferably preserved,” because the institute said it would be impractical to repair.

MIT is having problems with more recently built dormitories as well. Its Sidney-Pacific Graduate Residence, built in 2002, will close half of the building for a year this summer to upgrade its ventilation system because, an administrator told students in October, the heating and cooling never worked properly. The lack of sufficient air pressure sucked moisture into the building, caused rusting and other damage. The Sid-Pac renovation will displace 370 students, The MIT Tech reported.

The institute has been wrestling with the Bexley Hall problem for the past year and a half. Because Bexley is older than 50 years, the Cambridge Demolition Delay ordinance gives the Historical Commission jurisdiction. MIT was required to submit a plan for the future of the site so the commission could determine whether to allow demolition or recommend the building for landmark designation. MIT applied for demolition in June, submitted its plan in December, and the commission staff report was dated New Year’s Eve.

“I’m not showing that one as a proud moment for MIT,” said Israel Ruiz, the institute’s executive vice president, addressing the Planning Board for the February 2014 Town/Gown presentations. Ruiz said then that he wanted to “make sure there are no other examples” of similar failures.

No students or other members of the public attended the demolition review hearing, a striking contrast to the 40 people who attended the prior hearing, for a residential house on Highland Street in West Cambridge.

Former residents of Bexley Hall said administrators had agreed to tell them about such a meeting, but that they were not notified of Thursday’s hearing.

Notice of the meeting was printed in the Cambridge Chronicle and posted in City Hall. But the normal process mails notices to abutting property owners, which in this case means MIT but not its students.

There was no requirement to post a notice on Bexley, Sullivan said. Decades ago the commission stopped doing so on sites facing demolition after a complaint because they were “too effective,” Sullivan said.

Now that other city departments more regularly post notices, “we’ll try that again in cases like this, at least,” Sullivan said. 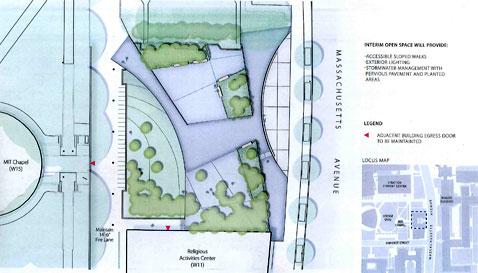 In coming before the Historical Commission, the institute indicated that as an interim measure it would replace Bexley with a small park with accommodations for large tour buses that stop near MIT’s main entrance and cause traffic issues on Massachusetts Avenue. Donham said MIT worked with former residents of Bexley as well as landscape architects to develop the park idea, seen above..

Longer term, the institute has “just kicked off a wide planning study to look at the entire west campus area,” she said.

Donham said that when MIT developed a plan for the site, it “would have no problems coming back” to the Historical Commission to review that plan.

This post was updated Jan. 12, 2015, to correct language in a Historical Commission vote to show the building would be “preferably” preserved.