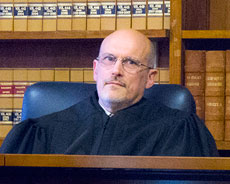 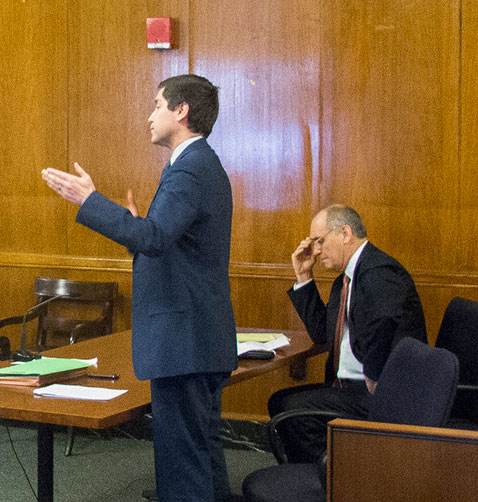 Attorneys Dan Hill, standing, and Mark Bobrowski were in Land Court on Wednesday launching a case challenging the validity of special permits issued for development of a former courthouse in East Cambridge (Photos: John Hawkinson).

A rough schedule for Sullivan Courthouse litigation was set by Judge Robert Foster of the Massachusetts Land Court on Wednesday when both sides gathered for the first hearing in the fight over the granting of Planning Board special permits for the redevelopment of the former courthouse at 40 Thorndike St. in East Cambridge.

Primarily a scheduling conference, the hearing lasted nearly an hour, with both sides acquainting Foster with their view of the case. A trial could come as early as November, and the next hearing in the case will be April 7. Lawyers on both sides will exchange questions and evidence – called discovery – and may ask the court to resolve the issue early without going to trial – a so-called “summary judgment.”

Two appeals have been consolidated: that of courthouse neighbors Michael Hawley, Roger Summons, Marie Saccoccio and Graham Gund; and that of attorney Dan Hill, who has offices across the street from the courthouse. Hill is representing himself, and the others are represented by Mark Bobrowski, author of the Handbook of Massachusetts Land Use and Planning Law.

The defense of permits is led by Kevin P. O’Flaherty of Goulston & Storrs, which represents developer Legatt McCall Properties. Lawyers for the city and state were also present, but took a back seat to O’Flaherty. Rob Dickey, the Legatt executive vice president who shepherded the redevelopment project, was also present at the counsel table.

A significant question before the court is whether it can resolve the case – or major portions of it – without going to trial. In summary judgment, the parties agree upon certain facts of the case and ask the judge to rule on the law as applied to those facts. Generally the court will look at a request for summary judgment in the light most favorable to the side not asking for it. If an issue cannot be decided on summary judgment, it will proceed to trial. In the land court, all trials are before a judge – there is no jury.

Judge Robert Foster of the Massachusetts Land Court will hear the case.

Foster set March 13 as the deadline for both sides to file briefs for summary judgment. The opposing sides have until April 3 to reply, and the judge will hold a hearing April 7. He’s expected to decide summary judgment within several weeks of that hearing.

For his summary judgment motion, Bobrowski told the judge he expects to argue that the existing courthouse structure violates zoning and cannot be considered a preexisting “nonconforming” use, because nonconformities arise when zoning changes around a building. This building was never compliant with zoning, because it was built by Middlesex County, which was immune from zoning, Bobrowski said.

“It isn’t that this is an analysis of a different use coming into the neighborhood that somehow has different impacts than what’s allowed,” O’Flaherty responded. “They’re all allowed.”

The judge asked the lawyers whether the assessment of the building’s impact was relative to its use as a courthouse, rather than relative to no building or to an empty building. “The building’s there,” he said, noting it was a 20-story building “sitting in a residential neighborhood. That horse has left the barn, it’s there.” 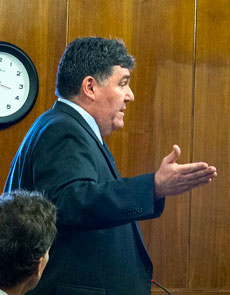 The Edward J. Sullivan Courthouse was built in the 1970s, amid protests, and was made available for bidding by developers in November 2011 as court offices opted out of the aging, asbestos-ridden building. Leggat McCall Properties won redevelopment rights from the state in December 2012 in a $33 million deal, but found its plans and permitting delayed by community questions. The company finally won its special permits in a late September vote by the Planning Board, but the neighbors’ lawsuits followed in mid-November.

“This project is clearly not more detrimental [to the neighborhood than what exists]; we’re taking two stories off,” O’Flaherty said. “If anything we’re going to reduce that shadow by two full stories.”

Bobrowski also wanted permission to argue for summary judgment using what he called the “Weld doctrine,” from Weld v. Board of Appeals of Gloucester, which says “you can’t defer substantive process issues in the special permit process.” Bobrowski said Cambridge’s decision to issue the special permit before the courthouse redevelopers had secured parking from either the city’s First Street Garage or Galleria Mall Garage violated the doctrine. But Foster said the issue was not appropriate for summary judgment.

Foster also set May 19 as the end of discovery, with another status conference two days later.