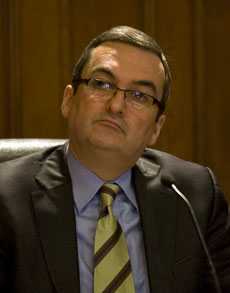 The last school budget subcommittee meeting saw several teachers pleading for “more hearts and hands” in the classrooms as they struggled to keep up with academic and testing demands and increasing emotional and behavioral issues among students. It seem to have had a major impact on committee members, clearly influencing Tuesday’s discussion of budget guidelines for the next school year.

In opening discussion on next year’s School Committee guidelines, budget subcommittee co-chairman Mervan Osborne referred to the teachers’ testimony as verifying what he had heard from parents and wondered if there “is a way to be responsive to these priorities?” He charged the committee to “please give the superintendent the clearest possible message” through the guidelines and hoped the language could be more explicit in focusing on family engagement and social and emotional supports for students and teachers, as well as providing adequate staffing levels, including more counselors, and addressing the achievement gap.

“I have sat in this room … for a very long time and what I’m struck by is what I think is a growing sense that the professional staff – and I mean the teachers in front of the kids – are asking us for help,” said Mayor David Maher in some of the strongest comments he has made in this committee. About their concerns about social and emotional behavioral support, he said, “I don’t remember it like it is right now.”

“We have to figure out a better way. If we don’t, we are headed down a very rocky road,” Maher said.

“I know we are focusing on teaching and learning and I know we are focused on building a better curriculum,” he said. “But sometimes it’s just getting down into the trenches and saying, ‘How can we help?’” He continued:

I walk into a school now and I see a principal on a walkie-talkie. I don’t get a good feeling about it. I feel like we have set these folks up – I feel like we are employing managers of buildings. I think the education leadership in the buildings is being lost.”

Pointing to pressures of standardized testing and other stresses, he said nobody was to blame, but that “we just haven’t figured it out yet.”

Members and some staff nodded in agreement. Patty Nolan and Fred Fantini joined Osborne in discussing how their concerns might be reflected in the guidelines. Nolan suggested stressing that measures of outcomes be “not just the test-based results that are killing our teachers and the students, but have something related to the joy of learning” and working toward creating a mindset among students that they can grow academically.

Member Kathleen Kelly wanted the guidelines to show “a real understanding of how important the social/emotional learning piece is to achievement.” Emphasis on excellent instruction and getting the curriculum “just right for every grade” is not sufficient, she said. “It seems to me that we have really lost the human face and the importance of the human connection within school communities and within classrooms. I think the teachers actually are speaking to that.”

Maher was also emphatic about focusing on upper schools soon. While acknowledging staff’s hard work on the schools – approved in March 2011 and opened in September 2012 with sixth-, seventh- and eighth-graders as part of the district’s Innovation Agenda – he said:

My belief is that we have to refocus our efforts [related to the upper schools] and it has to be seen as a priority … .The public has been very patient in giving us the time to work through something that no one ever thought on day one would be perfect. But I think we’re going to run out of time if we can’t have deliverables that the public can feel confident in in a relatively short period … .The public will lose patience if we don’t get it right.

That message resonated with the membership. Fantini said he was in “100 percent agreement” and urged that the committee make the upper schools top priority, followed by social and emotional support. Closing the achievement gap is a “very real” and statutory requirement, Fantini said, reminding the committee and administration that there is a statutory requirement to decrease the gap by 50 percent by the year 2017.

Maher and Harding referred to the committee’s retreat the previous week, in which the administration and committee worked on establishing joint priorities, in noting that there is not one common understanding of equity.

Despite the rhetoric, the committee is limited in what it can do with these guidelines, a point Harding kept stressing as he quizzed members on how they might tie their concerns to a budget guideline.

As the introduction to last year’s guidelines said, they “are meant to provide broad, overarching themes” and not specific initiatives, programs or policies. “We use these guidelines at a high altitude,” Superintendent Jeffrey Young clarified. “We want the ‘what’ and the ‘why,’ not the how.”

Last year’s committee guidelines and the superintendent’s strategic goals stressed under School Climate sections “building a safe, supporting and nurturing environment that allows student and staff to focus on achievement without distraction,” including explicitly supporting mental, emotional and social health through special programs and professional development. And both targeted ongoing “refinement” of the upper schools as a major goal, such as through committee language urging the superintendent to provide “a superior academic and social experience for all students.”

Yet still, the members seemed united in feeling that, as Maher put it, “we haven’t figured it out yet.”

Tuesday’s meeting also included a reminder that the discretionary funds available for new initiatives or increased staff levels is very limited, even if there is consensus. Chief Financial Officer Claire Spinner’s five-year enrollment and budget projections show a $1.5 million gap between expenditures and revenues for fiscal year 2016, assuming a “maintenance of effort” budget – that is, what it would cost next year to fund everything provided this year.

Total costs for running the schools next year without any changes in programs and supports is estimated to be $163.4 million, or an increase of 4.3 percent. Total revenues, based on an increase in property taxes collected by the city and a projected $300,000 decrease in state and federal aid, are projected to be $161.9 million, reflecting an overall 3.4 percent increase over this year’s adopted budget.

The resulting projected $1.5 million gap is typical of recent school budgets for this time of year. Spinner said there is “ongoing communication with the city manager’s office” on resolving the gap through possible revenue increases. In addition, the school department may find unspent money in this year’s budget that can be applied to next year’s, sometimes arising from conservative estimates that provide a cushion for critical expenditures such as transportation and energy costs, or out-of-district tuition costs. “We have to pay our [energy] bills,” Spinner said. “It is easier for us to have a little extra at the end than to not have enough to pay that bill” and look for midyear cuts.

Finally, there may be cuts to existing services. Closing last year’s gap needed none.

Even if the gap is eliminated without cuts, initiatives or staffing levels for next year will have to include either commensurate cuts or a separate appeal to City Manager Richard C. Rossi to provide more money. The committee is required to pass a balanced budget.

Young signaled possible administration priorities and initiatives for next year’s budget. He said he “could easily sign on to” committee concerns about the upper school, social and emotional support and closing the achievement gap and said earlier in the meeting that he “wouldn’t anticipate that, from our perspective, this will be a budget that will be long on big, brand-new, glossy initiatives.”

In referring to the “growth mindset” and the “art of teaching” concepts Nolan, Kelly, Osborne and Maher mentioned in talking about ways to improve the learning environment in the schools, the superintendent said “these are valuable, but still there is a knowledge base about what good teaching is. There are strategies that good teachers know how to do. We don’t want to get to a place where we think teaching is this kind of magical alchemy, because it’s not. There are skills that are involved.”

“I bring this up because the work that we are doing this year around the Highly Effective Teaching Project is focused first on the principals and the people who are evaluating and the coordinators and the coaches,” Young said. The project is being run by John Saphier and his organization, Research for Better Teaching, under a one-year, $140,000 contract funded in this and last year’s budget.

“Next year – well, we’re going to put in the budget, I hope you approve it,” Young continued, “it begins to move on to the teachers.” This project, he said, is about teaching these “good teacher skills.”

“I caution us against abandoning it. If anyone feels the desire to abandon the work that has begun and supplant it with something new or different that creates this kind of magical hope that if we all just close our eyes and believe it’s going to get better – that’s not going to work,” he said.

Harding responded that, though he didn’t hear anyone saying they wanted to drop this approach, they should remember that “many years ago we committed ourselves to excellent instruction in every classroom. There was only one problem with it – we never spoke about what the outcome was going to be for the student at the other end … You have to do that to gain the confidence the mayor talked about that we may be losing slowly and surely in our middle schools and other schools in our district.”