Film Festival will keep Arlington identity, even as it joins Cambridge roster of events 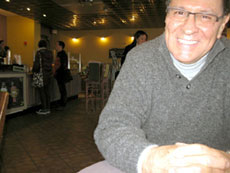 Film Festival will keep Arlington identity, even as it joins Cambridge roster of events

While Kendall Square Cinema is inheriting an international film festival in October, the event remains part of Arlington’s town tourism efforts and culture and will keep the town’s name as well as connections there.

In separate interviews, an Arlington International Film Festival co-organizer described the effort to continue to link the films to Arlington, while the co-owner of that town’s Regent Theatre offered his side of the story.

J. Alberto Guzman, who has operated the festival in town since 2011 with his wife, April Ranck, explained what led to the change of venue.

He put out both hands, his palms up and open. “It fell onto our plates,” he said.

Howie Sandler, Kendall Cinema general manager, reached out just after the 2014 festival ended in October, he said, noting he had approached a number of festivals and thought the Arlington festival would be a good fit for his patrons.

The deal took about seven weeks to cement. “I spoke with so many,” Guzman said.

Under the new arrangement, Kendall Square Cinema, owned by Landmark Theatres, a national chain, plans to charge the same rent the Regent did, but give the festival eight days instead of five, Guzman said. The festival dates are Oct. 15-22, running Thursday through Thursday.

Available to Kendall festivalgoers will be the 24-hour next-door parking garage, which charges $3 a car. Kendall Cinema is to provide promotion via social media (Facebook, Twitter and a Kendall newsletter) as well as on a large poster at the front of the site.

“We’re so excited to have this partnership,” Guzman said, smiling broadly.

As for the Regent, he said the four-year relationship worked for both sides. “We are really grateful to have been at the Regent,” he said. “We felt the people in town embraced us … the Regent was the home of the festival.”

No more. The decision to switch was made about mid-December, Guzman said.

Stein said in a telephone interview and subsequent emails that he learned about the changes at a meeting Dec. 21. The other owner, Richard Stavros, did not attend.

“They told me about their decision to move to the Kendall,” he said. “It appeared to be a foregone conclusion since there was no discussion then or previously about not returning to the Regent for a fifth year.”

Asked about their reactions to this news, Guzman said, “He was sad; I was sad, too.”

Stein said he remained cordial but felt surprise, and said he would have negotiated if Guzman had told him about the Kendall move before it was a done deal.

Asked about the loss of the business, he wrote: “We will miss hosting the AIFF as one of our regular, traditional annual events, but – given the significant number of rental inquiries I get, together with our own Regent-produced events – I don’t anticipate a problem finding something else to present during those dates in October.”

Stein and Guzman declined to say what weekly rent the festival paid.

Asked whether last October’s attendance could have been an issue, Guzman said it dropped 2 percent.

“We felt that we had a very good working relationship with the festival and had done our part in helping them get established and recognized within the town,” Stein said. “They brought something unique and fitting for the Regent, our audience, and the community – and for that they will be missed.”

The festival joins several others scattered throughout the year in Cambridge and Somerville, some big, some small:

A Bugs Bunny/Looney Tunes film festival at The Brattle Theatre will hold its 20th anniversary from Feb. 14-21.

The Boston Underground Film Festival has moved around in its 15 years, moving from South Boston to Jamaica Plain and Allston, and to Somerville in 2005, but now has settled in Harvard Square for showings at The Brattle Theatre from March 26-30. The Independent Film Festival Boston has been transforming Davis Square for more than a dozen years from April 22-29.

A Summer Fling festival of one-minute films plays at Gallery 263 in Cambridgeport in early August, and the Art City collective introduced a Community Film Festival at Lesley University’s Hall Amphitheater in Porter Square in mid-August.

The Etheria Science Fiction & Fantasy Film Festival has presented the best in emerging female science fiction and fantasy filmmakers at the Somerville Theatre in early October.

The Boston International Kids Film Festival, designed for kids 10 and up and their families, plays at the Somerville Theatre and at Tufts University in early November.

The news about the Kendall move came as a surprise to two people listed as members of the festival advisory board: Stein and Arlington resident Walter Locke. Guzman said in an email Jan. 4 that those listed as advisers on the festival website are “are consultants/advisers on film-related issues and or concerns only.”

“We have an inner circle of people that have expertise in various business and organizational areas that we are privileged to be able to consult with. Moving the festival to the Kendall Square Cinema was certainly a decision that was weighed very carefully and was discussed at length with many people,” he said.

Those who attended previous festivals and workshops at Arlington High School are assured by Guzman that it will remain a town product in various ways.

Although a contest challenging students to create the festival poster has branched out to Cambridge and other high schools, the celebration of its winner, in February, will remain in town, and the festival will still be a sponsor of an Arlington Teen Video Contest in March and partner in a Short Animation Film Festival.

The festival will continue to be a partner for a midsummer block party and be involved in a fundraising event for the Friends of the Library. And the kickoff for next fall’s festival is expected to be held in September at the Regent or at Arlington’s Town Hall.

Angela Olszewski, co-chairwoman of The Arlington Tourism & Economic Development Committee, said she was putting the festival’s move on an agenda for committee discussion.