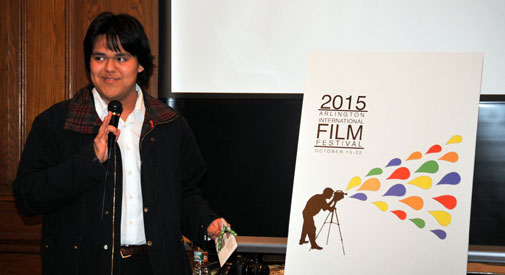 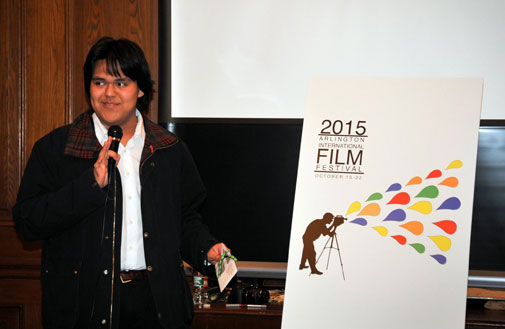 Naythen T. Lowe, winner of the 2015 Arlington International Film Festival Poster Contest, will be a judge for the October screenings. (Photo: AIFF)

The Arlington International Film Festival has received more than 1,500 submissions from around the globe, and 15 jurors have been selected to choose the entries for the fifth annual event Oct. 15-22 at the Kendall Square Cinema.

The films were received from an alphabet-long list – from Argentina to Vietnam.

This year’s jurors, chosen for their knowledge, creativity, innovation and experience in the film industry, are:

Jonathan B. Barbato, a freelance filmmaker who works with the Harvard Kennedy School, the Mass Literacy Foundation, the Boston Herald and others to create educational content and is production coordinator at Arlington Community Media. He will judge the high school shorts.

Elisabeth Myles Birk has worked in the film industry in New York and Los Angeles as a script supervisor, writer, director and producer. She writes and directs projects through her company, DanceBaby Films, and is developing a feature film, “The Identity of Katherine,” based on her original screenplay. In the works is “The Double View,” a screen adaptation of the 1960 novel by Chandler Brossard.

Alice Bouvrie is a documentary producer and director and has worked as an assistant director on feature films, TV series and specials, commercials and industrials before going independent in 1993 and forming Mineral King Productions. In 2005, she was a filmmaker-in-residence at WGBH, and in 2011 won a Massachusetts Cultural Council Fellowship.

Barbara Costa is a freelance project manager and multimedia producer of predominantly science subjects for online courses, websites, public television documentaries, educational videos and museum programs and exhibits. For nine years, she worked in documentary production at PBS’ “Nova” and now is production manager on the film “Edgar A. Poe … Buried Alive.” She is co-chairwoman of the Arlington Commission on Arts & Culture and is on the board of the Arlington Center for the Arts.

Elizabeth DiNolfo was a documentary filmmaker for more than a decade and has worked on documentary, educational and commercial projects in Europe, Africa and across the United States. Her work in credited films and videos includes “Eyes on the Prize,” “Lily Tomlin: In Search for Signs of Intelligence” and “Wild Women Don’t Have the Blues.”

Amy R. Handler is a theater and film director, journalist, publicist and film critic. Her written work appears in Film International Magazine, Cineaste, Film Threat, Moving Pictures Magazine and other periodicals. She is writing several chapters in a book, “German Cinema: A Critical Filmography to 1945.”

John Kusiak composes music for film, television and live performance. His projects include feature films, television documentaries for HBO, PBS and IFC and large-screen exhibitions. Other projects have included music for the opening film of two Academy Awards programs and commercials for United Airlines, Quaker Oats and MasterCard, among others. John also writes music for live performance, including collaborations with Boston-based Prometheus Dance.

Christopher LeGare is a teacher and independent filmmaker specializing in producing documentary profiles of artists and their works. He has promoted cultural events relating to the Arlington Center for the Arts, Arlington International Film Festival, Arlington Committee of Tourism and Economic Development, Town of Arlington Public Art, the Concord Art Association and AXA Art in Germany. He will judge the high school student shorts.

Naythen T. Lowe is an aspiring filmmaker, director and critic at the Teen Media Program of the Community Arts Center in Cambridge. He has completed six short films under the tutelage of the TMP and in support of his fledgling film production group, Lowe Budget Films. He is also winner of the 2015 AIFF Poster Contest, and will judge the high school student shorts.

Michael Mahin began writing film reviews for the Arlington Advocate while at Arlington High School. He was involved with the school’s newspaper and literary magazine and, as a senior, served as co-editor of The Ponder Report. He is in his final year at Emerson College, following a life-long interest in film and screenwriting. He will judge the high school student shorts.

Bob Nesson produces and shoots documentaries for broadcast, education and on commission, including “Afghanistan: Between Three Worlds”; “Anyplace Wild”; “It is Memory: the Holocaust Sculptor Natan Rapoport”; and “The Light Stuff” for Nova and “Surviving Mars” for the Discovery Channel). He is an adjunct professor at Emerson College.

Eric Stange, executive producer and founder of Spy Pond Productions of Arlington, is an award-winning independent documentary film producer, director and writer who specializes in history and science subjects. His work has been broadcast on PBS, The Discovery Channel and the BBC. Before becoming a filmmaker he wrote about art and culture for The New York Times, The Boston Globe, The Atlantic Monthly and other publications.

Marga Vera has been a script consultant, screenwriter, line producer and outreach director for film and television and was co-founder of independent cultural events management and production company Great Ways.

Previous story: Film Festival will keep Arlington identity, even as it joins Cambridge roster of events